Olympic effort for an abandoned village 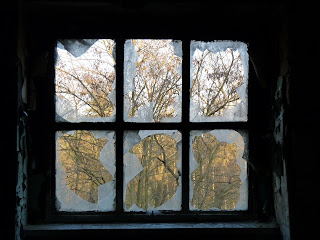 Almost too knackered by the time I got there to do any exploration at all. Cycled over 40km from Friedrichshain to Elstal, wind against me all the way, efforts compounded by several unforeseen diversions due to the slightly optimistic tactic of simply pointing the bike west. "Who needs maps anyway?" I won't be doing that again. And then I still faced the prospect of cycling back! Jaysus, I was wrecked.
Yes, it truly was an Olympic effort to get there - Jesse Owens himself would have been proud - but there was no way I could arrive at this abandoned village once home to 4,000 athletes, peep through the fence, and simply turn back the way I'd come. I had to go in! 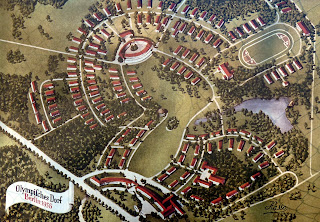 There used to be a time when the Olympics was interesting, and Berlin's in 1936 was the most interesting of all. Coming at a time when the Nazis had been in power for three years, it provided Hitler with a stage to show the world their greatness and prove the superiority of the Aryan race.
That notion was kicked back up his arse when a member of an inferior race ultimately proved superior to the rest. There was nothing inferior about the aforementioned Owens' racing in 1936 as his four gold medals affirmed, much to the pleasure of all but the Führer.
His native Austria only collected a measly 13 medals, compared with his adopted country's 89, so he masterminded the Anschluß a couple of years later, before his insatiable appetite for more gold medals prompted his bid to take over the world in 1939. It's no coincidence Nazi Germany attacked, fought or annexed countries which finished above Austria in the medal table from that Olympics.
Thankfully Ireland escaped such treatment as it had boycotted the games, not for any bold political statement against the Nazis, but because of a row over northern athletes competing for the British. The Brits shared Adolf's penchant for medals and had long plundered Irish talent as their own. 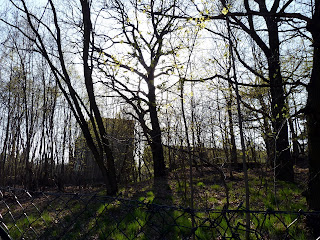 Anyway, such thoughts were far from my head as I contemplated the empty buildings lurking ominously between the trees behind the fence. This was it! The Olympic Village, 14km west of Olympiastadion, built between 1934 and 1936, and abandoned once the last Russian soldiers left in 1992.
I'd circled the 550,000 square metre site and noticed a couple of vehicles behind the padlocked gates, on the other side, an unwelcome sign of pestering human presence. As long as they weren't Russian soldiers...
The wind had died down (of course) and all was still. Feck it, I'm going in. Despite nearly impaling myself on the fence, I landed on both feet. I stopped. Listened. Watched. A dog barked in the distance. I froze. Was it a guard dog? Shit. All still again. The trees rustled gently. I moved forward, tentatively. If it was a dog I'd worry about it when his jaws were snapping at my heels. I made a beeline for the first building I could see, one I soon learned was the Hindenburg Haus, the main administration centre for the games with its own TV viewing room. (The Olympics of 1936 provided the first live sports broadcast to the world as I mentioned in a previous post on Tacheles.) 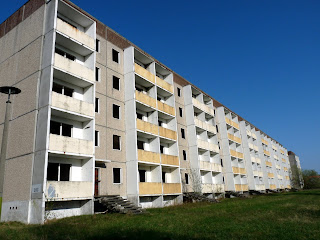 No dogs came near me, and so I proceeded to the Plattenbau buildings, huge empty shells of soulless flats erected by the Russians long after the last athletes had left, after the war, when they were used to house Soviet military personnel from the nearby barracks.
Now the flats are left to the wallpaper which still plasters their walls. The wind had picked up again, so it was flapping unconcertingly as I tip-toed through the doorways. Flap, flap, flap! As if trying to talk to me. My heart was in my mouth. These things are best not done alone. 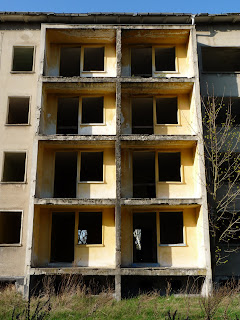 Strange noises came from below me, then above; wood creaking, paper rustling, doors groaning, metal banging. Banging, banging, banging. I realised then, that was actually my heart.
Still I went on, exploring every room, taking more photos of wallpaper than I've ever done before. Up and up I went, up the glass-strewn stairs, until I came to a ladder which led to the roof. The ladder looked feeble but still I went up, the draw of what may be ahead proving far stronger than common sense.
Despite not finding anything remarkable, I was captivated. Everywhere was fascinating dullness, mundane marvels; everywhere an unknown story desperate to be told. Who lived here? What did they do? Where are they now? Where did they buy their wallpaper? I looked in every nook, every cranny (don't ask me what a nook or a cranny is), before eventually deciding to explore the rest of the site, the buildings from 1936. 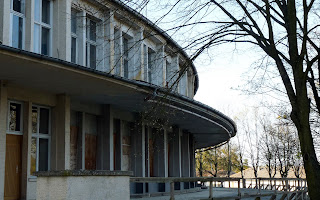 It wasn't long before I discovered das Speisehaus der Nationen, where the athletes used to eat, and several of the 138 one-story houses where they used to live. Jesse Owens' has been restored (they can't leave anything alone) and one can visit it by going through the normal procedures, (i.e. just ask at the entrance when the site's open to the public). 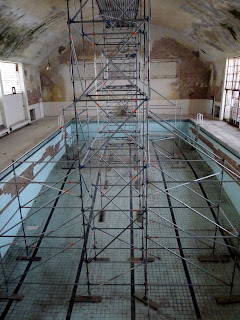 Also being restored is the old swimming hall. It was all sealed off, so I had to squeeze in under heavy tarpaulin to get in. Thankfully, they hadn't yet ruined it by restoring it, and I could marvel at it in its original state. Again my heart was in my mouth, with the tarp flapping like mad in the wind, and the scaffolding creaking and groaning over my head as I surveyed the vibrant cyan tiles, the windows and the bars. 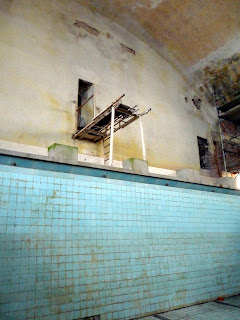 Thump, thump, thump! I could hear footsteps outside, outside or in my head, the effect was the same.
RING! RING!! RING!!! What the fuck?! I jump out of my skin with fright. My phone's ringing, at a volume to wake the dead. Jesus, the noise!! I turn it off, cower at the bottom of the pool, and await my inevitable discovery.
After a few minutes, nobody comes, so I tentatively continue with my nosing. Up on the diving board, behind in the changing rooms, down the stairs to the cellar, in under the pool. I was literally getting in over my head. I couldn't see a thing, relying on the red focus light from my camera again, when I realised I really should be getting home. It was already 7.30pm and I still had to cycle back. 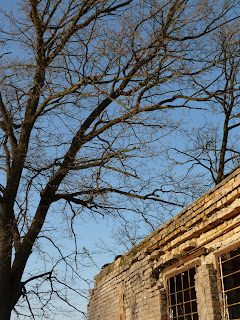 Outside I met someone as surprised to see me as I was to see him. A rabbit. Probably used to having the whole Olympic Village to himself, hopping around, imaging every day he's Jesse Owens winning another four gold medals. We both froze and looked at each other. He twitched his nose and then he was gone, running as if going for another gold. Nothing inferior about his race either.

What
Olympic Village built for the 1936 Olympic Games in Berlin. 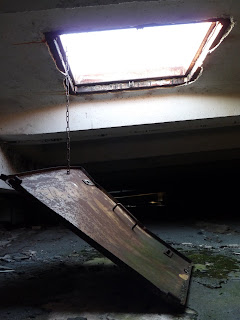 How to get there
Well, you could cycle like I did from Berlin, but I don't recommend it. Better to take the S-Bahn to Spandau and cycle from there (about 15 km). If you're too lazy for that, best option is by car - head west from Straße des 17. Juni (the big one in the middle of Tiergarten) and keep going straight on the B5 until you see the signs for Elstal. The marking on Google maps is wrong, but I've marked the site here.

Getting in
Go around to the other side away from the security and nosy guards, and just hope over the fence. Be careful! 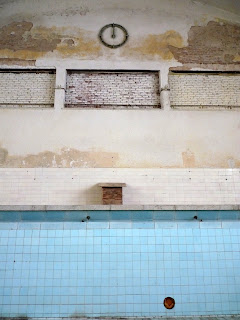 Anytime before dark, preferably when it's not raining.

Difficulty rating
9/10 Getting there is difficult, but once you're in, you're laughin'.

Who to bring
People who don't mind the sound of wallpaper flapping.

What to bring
Camera. A few bottles of Sterni to break up the journey and/or toast your success on getting there. They'll be warm once you arrive, but what the hell. Maybe bring a few snacks to nibble on too. Unlike the Olympics nowadays, there's a surprising lack of catering stands in this abandoned village. 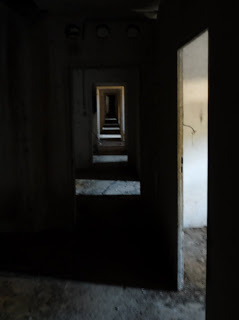 Dangers
The imagination tends to run away with itself when exploring on your own, so watch out for that. Strange noises and eerie silences make for tingly nerves. Otherwise, keep an eye out for the security guards out the front.

Again, this guide is designed to help others get to and enjoy a wonderful site before it's too late. They're still in the process of restoration, so I guess it won't be long before they're charging people in and all the fun's gone out of it. Maybe they already are - I didn't check. Anyway, please share with all like-minded individuals on 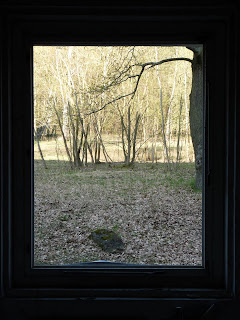 Facebollocks or whatever all ye young people are using these days.

I forgot to mention that the director of the Olympic Village, Wolfgang Fürstner, took his own life three days after the games ended. He had Jewish roots and learned he was to be dismissed from the Wehrmacht because he had been classified a Jew by the Nazis, so rather than face such humiliation, he shot himself with a pistol not far from the lake. The Nazis covered up his suicide to avoid unwelcome attention. Just another little footnote to a crazy story. I could write more, but it's time ye went explorin'. 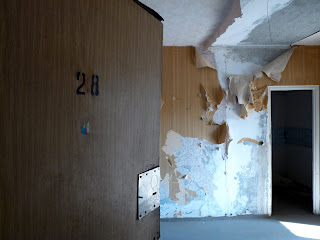 More images to be gawped and marvelled at can be found at this link.