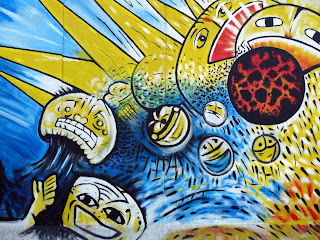 I'm hurting, inside and out. The season finally resumed today for Theresas Μütter. We lost. Dunno the score, but double digits anyway. Although we did pull one back at the end! A semblance of pride restored when Christoph blasted the ball to the net with five minutes to go, woohoo!!! But we let in another two or three after that. We tried though, which is the main thing.
Our opponents, JNC Polyvalent Berlin, turned up in yellow and green like the Brazilian national team but we turned out more Kaká than they were. Of course we were in our distinctive bright orange Theresas Mütter Trikots. Any spectators would have had to wear shades to protect their eyes from the glare. Nevertheless, I felt the surge of pride when I pulled it on again after so long, and 'twas great to see the other Mütters again for the first time since September. 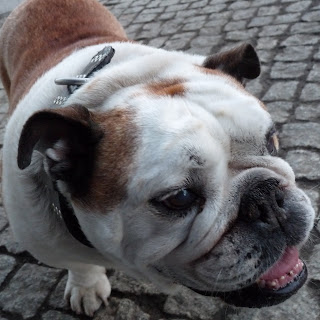 (It would have been nicer to see more of them though. We only had ten players for most of the game.)
It was the first time I'd kicked a ball in anger since playing with the niños from Huancayo at 3,600 metres last October. 'Twas great to be able to breathe this morning but unfortunately the eye-foot-ball coordination wasn't really there. I ran and chased and huffed and puffed and managed to get a couple of kicks in but that's about it. Knackered at the end. I'm not the midfield enforcer I know they'd like me to be.
Thankfully the league's finally up and running again after a winter of snow and ice (snowing pigs and cows again as I type though) with training again next Thursday. God knows we need it. My legs feel like tree trunks. Yeah it hurts, but it's good to be back in action. I'm sure some heroic days lie ahead. 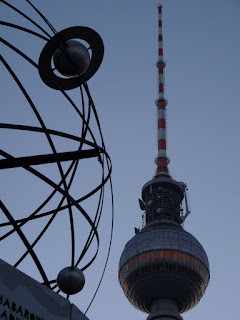 In other news, I've worked my way through the first box of Barry's Tea brought over by Deborah and Richie some 20 days ago. That's 160 bags in 20 days, an average of eight a day. I'd have to have visitors from Ireland every three weeks of so to keep stocks at a sustainable level. I'll probably just have to calm down on the tea-drinking...

Yesterday I bought an iron. A flippin' iron! The new job starts on Tuesday, and I've to wear a suit to fit in with my fancy surroundings. I presume they don't want me turning up like a knacker so I'd to lash out €19.99 for an Eisenbügel despite it going against everything I believe in. I never thought I'd see the day.
So tomorrow's my last day of freedom. I guess I'll be ironing my three shirts on the kitchen table. No way was I going to lash out for an ironing table as well. Now that would really hurt.
Labels: Fußball Tea Theresas Mütter