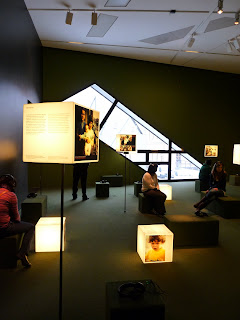 Last Friday, when Niamh and Helen were over, we went to the Jewish Museum, as noteworthy for its design as its content. The new building, completed in 1999, resembles a shattered Star of David and is built to reflect the twisted and tortuous route Jews have endured through their history with intersecting tunnels and steep, steep stairs. You're knackered by the time you negotiate your way around. The museum focused on all aspects of Jewish history, not just the Holocaust, although this is by far the most interesting part (though they mightn't like to admit it).
Maybe the rest would have been more interesting if I'd been able to get an audio guide. You have to pay and leave your ID as a deposit and when I gave your wan my press pass, she sneered: "Aber das ist nichts wichtiges." It's important to me ye aul' bat. So that wasn't a good start, especially when compared to the Reichstag the day before where guides are free and you don't need any deposit.
There are plenty of audio and visual exhibits at the Jewish Museum however, so even without a guide there's more than enough to digest. We started at the wrong end due to the complicated design and a natural compulsion to doing everything arseways. Starting with the Holocaust will leave you thoroughly depressed from the beginning. Some of the imagery is shocking naturally enough. The aftermath is also covered. It was fascinating to see footage of the Auschwitz trial when the accused would attempt to smash the filming cameras as they entered the court.
Of particular interest to me was the place of Jews in German society between 1800 and 1914, the plight of people who were as enthusiastically German as anyone else, who would gladly fight for Prussia against France for example, but who were denied full rights due to their religion. 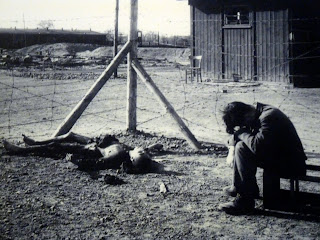 The rest of the exhibition shows the Jews have always been persecuted, by everyone, so it's certainly not the place to go if you're looking for a light afternoon's entertainment. Niamh and Helen certainly weren't their usual chirpy selves afterwards, although that may have been because they were knackered too.
While interesting per se, I found the museum a bit stretched, as if they were trying to justify the impressive building with the exhibits within. You walk and walk and walk, around corners and up steps, as if the organisers want visitors to suffer so they'll better understand the suffering of the Jews. They don't actually need to do that. The exhibits would be enough. 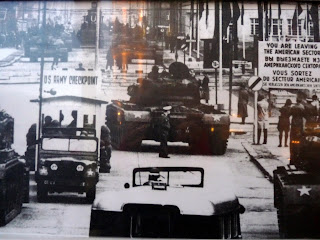 On our way home we nearly saw a cyclist come to blows with a motorist at Checkpoint Charlie in a show of aggression not seen since Soviet and US tanks faced-off there during the Cold War. The car must have hit the cyclist who stopped in front and roared back at the driver with all the cars behind beeping like mad. The car tore off. Slammed on the brakes in front of the cyclist, driver hopped out, went to punch him! Mad shit. The cyclist wisely kept going. The driver got back in, and screeched off again, no doubt to vent his fury at someone else.
"Happens in Berlin all the time," I told Helen. Bikes and cars just don't get on in this city. Well, after that we needed a couple of Weißbiers to calm the nerves. Any excuse.
Labels: Berlin Checkpoint Charlie Cold war Holocaust Jewish Museum Nazis tourist attractions