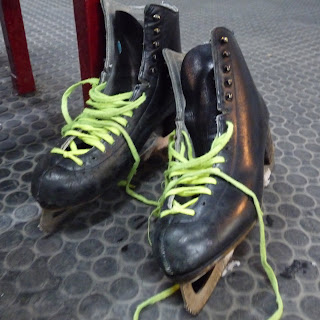 Kids up to my knees whooshed past in a blur of motion, while old grannies zoomed by, but I concentrated on staying upright, hand desperately clutching the railing as my feet threatened to shoot out out from under me. I slipped, skated and slid, all the while grasping the lifeline of that railing, determined not to fall whatever the hell else happened.
Schlittschuhlaufen! Ice-skating to you and me, and it was great! It was only the second time I'd been and I did all I could not to suffer the ignominy of flying up into the air and landing on my arse. But it was hard, walking on a carpet of moving marbles.
"Keep your fingers in if you fall," Jenny advised me. Apparently other skaters like nothing more than severing the indexes of stricken learners as they flail about on the ice. I didn't take αny chances. After being coaxed to let go of the railing, I grasped her hand for balance, almost breaking it at times, and we skated around and around the Erika Hess Eisstadion. Head down, total concentration, resolute not to fall. 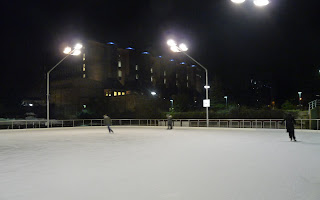 It was "Happy Hour", the price brought down to €1.65 from some previously outrageous price, and another €3 to rent the shoes, so I was determined to get my money's worth without looking like an eejit.
I'd no balance, thoroughly unbalanced by the unbalancing events of the previous night, not to mention the Weißbiers and Jägers I'd consumed to try and forget it. I clutched Jenny's hand like a two-year-old. Don't fall, don't fall, don't fall. But I didn't.
Then the five of us formed a line, Jenny and Anna on one side, Jule and Robert on the other, as they pulled me along in the middle while we reached speeds which would have relaunched the Sputnik. "Fuuuuuccckkkk!" Everything just a blur. Jule laughed they were going to let me go. "You can't even if you wanted to," I replied, gripping her arm even tighter. 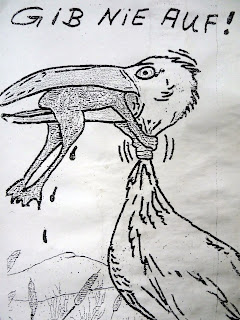 "Gib nie auf!" a poster in the changing room urges. Never give up, with an inspirational picture of a frog strangling his aggressor despite already being half-swallowed. Perhaps a lesson to be learned there. Other posters advertise Schlittschuh Schule (Ice-skating school, much easier to say in English). Maybe next year I'll enroll. Either way, the season ends on Sunday, so there won't be anymore Schlittschuhlaufen this year. I'd have gone more often if it wasn't so damn cold but for some reason, known only to the ice, it just isn't as popular in the summer.
Labels: cold ice-skating