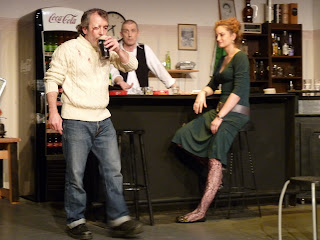 Well, it's two weeks since the Shenanigans came to a close, and it's only now I can catch my breath. Stephen Don's play opened to a packed and somewhat ironically-named English Theatre on St. Patrick's night and played to sell out crowds on each of the following five nights.
On opening night they were pulling out old dusty rusty seats from the cellar to fit in every corner of the theatre, seats on top of seats, and when they ran out of seats, people crammed in the sides and behind, and still people were turned away disappointed from the door. Schadenfreude for the ones who made it in. They were beating down the door to get in but there was just no more room. Must have been the outstanding publicity piece which had been written beforehand. 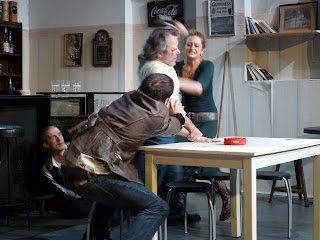 After going to the rehearsals, 'twas mad for me to see the transformation on stage, as the Shenanigans bar was brought to life in front of my eyes, with the map of Ireland made by Dáire's mother behind, the old clock on the wall, and the compulsory pictures of things no one will ever look at. A sandwich board gave the day's lunch specials: Ham and Cheese, Ham and Bacon, Ham and Onion, Ham and Beef, and for the vegetarians - Ham and Lettuce. 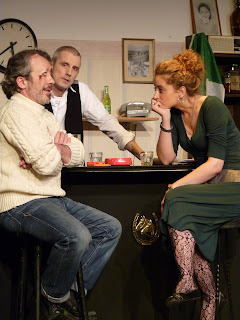 I don't know what they would have done if they ran out of ham.
I felt like I was in the bar. I practically was, with a beer in my hand and sitting beside the jukebox as the play got underway with Colum (David Masterson, another Brayman lost in Berlin) sheltering a frantic Jimmy (Paul Salamone) under the bar from the rampaging big brother Mickey.
"There's a lot more going on here than meets the eye," said Mickey when he barged in. "A great deal more!" He was right. There feckin' was. I didn't know where to look half the time despite the happenings happening right in front of my eyes. Mickey, played by Belfastman Stephen Hanna, roared and bellowed, paced and prowled, and let his frustrations loose on the theatre, as the pipes trembled under the bar. 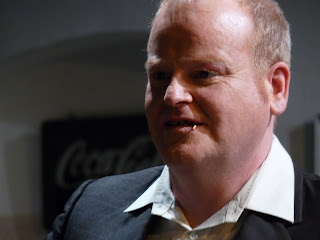 It wasn't long before the riddle of Jimmy rattling the pipes was discovered and then all hell broke loose.
Nuala, played by Anna Tkach, brought some rare glamour to a country bar, but even she was powerless to stop the escapades of the "two boyos", played by Alan Glen (right) and Kevin McKinnon, from scaring the beJaysus out of everyone. Violently funny or funny violence, the audience couldn't decide as the tension built up and up. Quentin O'Tarantino. 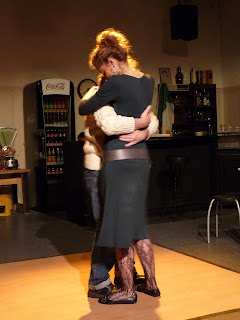 The crowd didn't know whether to laugh or run away, but they remained rooted to the spot as events unfolded before their shamshocked eyes.
"Sometimes you need to be diverted in life," they were told. Well, there was no end to the diversion here! A tragic comedy, a black poem, a trick and a triumph, this was a plotty plot which loses the plot but then finds it again as everything threatens to go to pot. A dark comedy in which you're afraid to laugh, but you laugh all the same. Who said Schadenfreude was German? 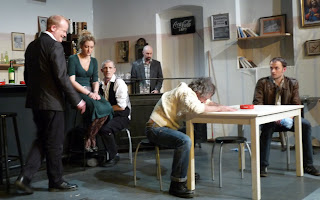 For those who missed all the Shenanigans there is good news. It's coming back! Not sure when or where yet, but I'll let you know as soon as director S.D. Clifford comes out from hiding under the bar.