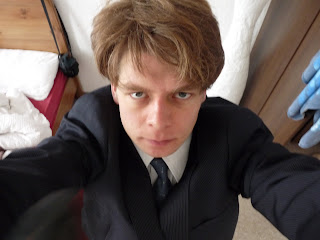 Erster Tag geschafft! The first day of work! Training, to be precise. These Germans wouldn't let you run off and start a job willy-nilly; they insist on telling you a bit about it and how to do it first. In Ireland it's a different story. "Here's a phone and there's a phone book. Good luck," is all I was ever told on starting a sales job there...
So I've another three days' training to go. Just as well too. I know as much about the job now as I did when I turned up first thing this morning. "Bin hier zu anfangen." Not a word of English did they speak, everything in German! I guess I shouldn't complain; we are in Germany after all. But still, it really was a challenge to avoid having my head fried by all the marketing and hi-tech blather I was supposed to process, in another language!
There was nowhere to hide. Just three of us training. I spent the day furiously nodding like a woodpecker, issuing the odd "uh-huh", and uttering timely observations to show I was paying attention. "Ja!" and "Das wäre ein ecumenical matter." The trick is to interject with authority, so they think you know what you're talking about.
In between I tried stop my eyes glazing over, to look at the trainers' eyes when they were speaking, and to appear totally engrossed in what they were saying. In fact, I spent more energy trying to look like I knew what they were talking about to actually understanding it! It's a good thing I did sales before, my "playground" as Noddy encouragingly described it last week.
"Bin ungeduldig," I told your wan this morning. "Ich will eigentlich verkaufen. Bin nur hier um Geld zu verdienen." Only in sales can you say you're only there for the money.
It got a bit awkward when the three of us were left alone. Total silence. Peas in a pod with nothing to talk about but the pod, which offers limited possibilities. One of them is as camp as a field of wigwams - absolutely brilliant - while the girl was shy at first and only came out of her wigwam towards the end. They're very nice but none of us have anything in common so it promises to be an interesting week. 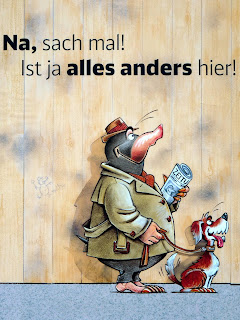 We were brought around the office when our new co-workers waved and offered friendly smiles. Some didn't bother their arses. I got in a lift with one of them on the way up and the fucker wouldn't even say hello! I figured I was the new guy so it wasn't up to me to make the first move so I didn't say hello either. To be honest, it was nice not to have to speak or listen.
I walked home afterwards, still trying to break in my pointy shoes. They are so long and pointy I actually tripped over them on the way to the U-Bahn this morning. The rest of the day was spent walking around like a clown. I even looked like a clown in my ill-fitting suit - miles too big.
In fact, all my "business attire" is ill-fitting, as if it's an extra size they made just for me. I've to nip down to the shop again now to buy some more. Anyone looking for a pinstripe dark blue suit, too big for me (jacket eur 54 trousers eur 48), and missing a button on the trousers, but otherwise fine and hardly ever used (Derek's wedding and a couple of interviews), can get in touch through the usual channels.
Labels: job Language Life work