Fast food art at the Hamburger 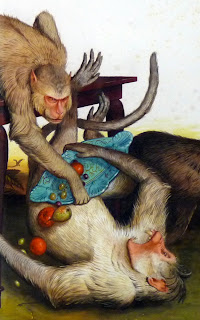 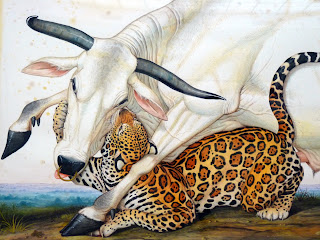 A gorilla cleaning his rifle, a jaguar locked in a deadly embrace with a wildebeest's neck, a tiger taming a lion, bears hanging from a tree, a troop of monkeys fighting over the spoils of a feast; it could be any sitting of the Dáil, but it's not. It's Bestiarium, a wonderful collection of some of the works of Walton Ford at the Hamburger Bahnhof.
The images are the result of a curious fusion of the artists' natural history enquiries and accounts from the past of explorers, missionaries and colonists in a brave new world, brought to brilliant watercolour life again before our eyes. They are, in effect, mad, and no words can I write to trump the effect of this aesthetic feast. 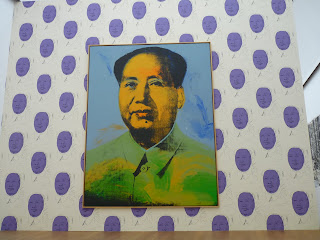 The Hamburger Bahnhof itself is not, as its name would imply, a transport hub for fast food (which would only make it faster) but a Museum für Gegenwart (contemporary). A fine building, it was a railway station once upon a time when it was indeed used by Hamburgers to get home up to 1884. Now, like everyone else, they use the Hauptbahnhof nearby to get where they're going.
As a contemporary musum, the Hamburger Bahnhof is now home to collections of art from the likes of Andy Warhol, Otto Zitko, Salvador Dali and "Someone Else With My Fingerprints" whoever the hell that is and why they couldn't use their own fingerprints. Oh wait, they did. They're just claiming the credit for someone else's work. Oh wait, they're not. Ah, forget it.

Some of the stuff was great, but some - I'm afraid to say - is absolute shite. Quite how anyone could call it art is beyond me. Broken tellies surrounded by dustpans and smashed glass. Another room full of boulders; what the hell was that about? It actually takes more creativity from the viewer to imagine what they're looking at is art than the so called artist can ever dream of. It just shows a lot of art has more to do with cheese and wine than anything else. 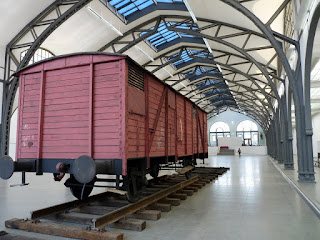 One installation, The Saints by Paul Pfeiffer, was just a huge empty white room filled with the noise of a crowd, behind which was a screen showing the World Cup final from 1966 beside another showing actors reacting to the action. This, apparently, is art. Of course, any installation featuring England winning a World Cup is already off on a bad start, but even if it was Ireland I'd be hard pressed to describe it as art.
Thankfully, one can't say the same about Walton Ford's work which is quite simply brilliant. The exhibition continues until May 24th. 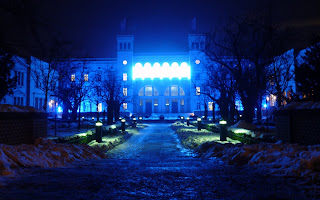