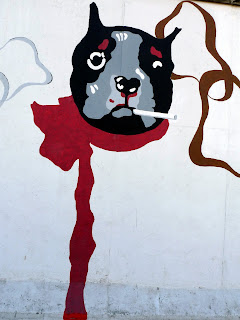 Berlin's dogs seem to have a major issue with toilet manners. Their shit is everywhere! They seem to think they can just shit whenever and wherever they please. Not one shit about their shit do they give. Drop and plop, the more the better. In fact, they seem to go out of their way to leave their Scheiße precisely where they know someone will step in it.
When I first moved here I used to stand in dog shit every other day. Eventually I learned the only way to avoid squishing into poo was to walk with the head down, eyes scouring the pavement for canine crap. I also cycle whenever possible to avoid having to touch my feet off the ground.
The problem is acerbated now that the snow and ice has melted. Three months' shite which had been in deep storage is now released for all to step in. My sister and cousin were over at the weekend. Walking along the canal in Kreuzberg on Saturday, we actually had to leave the pavement and walk on the road. There was so much shit on the pavement, there was virtually nowhere left to place a foot without standing in it! "I hate that shit," my cousin remarked, closer to the truth than she realised. 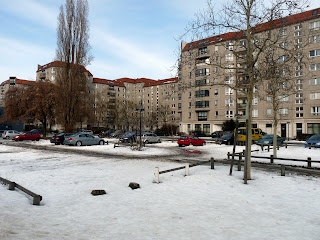 Hitler's bunker is covered in dog shit, in itself no bad thing. Just a nondescript carpark now, marked with a simple plaque, it has fallen foul of a smear campaign by local pooches who seem to shit profusely and regularly all over it. It would be quite impressive if they didn't ruin their point by shitting everywhere else too.
Of course, the dogs themselves can't be blamed. Manners are learned at home, and it seems their lazy owners have none. They just don't give a shit while their pooches do.
Labels: Berlin dogshit Hitler