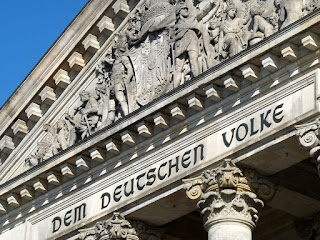 The Reichstag is the most visited government building in the world, what with all the curious Auslanders dying for a gawk at the corridors of power where Angela broods on how to deal with the Greeks. Long lines of tourists, longer than the dole queues in Ireland, form outside the impressive bullet-scarred building no matter what the weather, sometimes for two hours or more, enthusiasm declining with the level of conversation. I remember last year, queuing with Eoghan, when the conversation descended to unprecedented levels of ráméis (and that's saying something) before we were finally let in.
Of course, Angela and all the other head honchos don't have to queue with the commoners outside, but are ushered in their own private back entrance. They even block off the street behind when the Bundestag (as they prefer to call it now) is in session, just to stop knackers like me running in disrupting things. 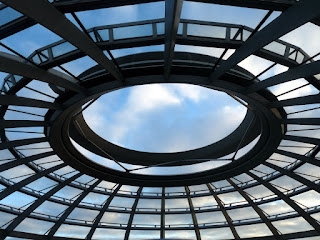 But there is a way to avoid queueing like a schmuck. Don't tell anyone or everyone will be doing it, but when my favourite cousin came to visit last week, I couldn't have her waiting out in the freezing cold with all the peasants. A quick phonecall (+49-30-2262990) and we had a table reserved at the rooftop restaurant for Kaffee und Kuchen (any excuse). We promptly skipped the queue and entered by a sneaky entrance at the side, before going through security and being whisked up to the top. Of course, the restaurant prices would bankrupt a sheik, but if you're coming directly from Dublin they're alright. You can actually just reserve the table and go off on a tour of the magnificent dome without showing up at the restaurant after you've skipped the queue, but that would be really sneaky. I'd never even think of such a thing. 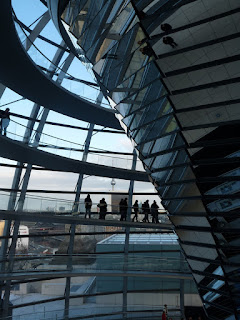 The dome itself is well worth seeing, all mirrors and glass and crazy angles which encourage all sorts of arty photography from the spiralling walkway. It's situated directly over the parliament floor and the design is such that visitors can observe the shenanigans of their elected leaders below. All clarity and openness here. Jaysus, you'd need 24-hour surveillance to keep up with the Irish lads' hi-jinx.
All the mirrors and stuff radiate natural light into the chamber, while a shield tracks the sun to stop the political leaders' precious eyes being dazzled. Air is recycled, with stale air from the parliament floor directed through cleverly concealed vents to heat the building (all the shite they speak, it's good to see it put to some use), and fresh air brought in through the opening at the top.
Entrance is free of charge which might also help explain the long queues, but the idea behind it all is that German democracy at work is supposed to be accessible to all. (Again, a lesson for Fianna "Fail" there and the rest of the Irish cowboys. Can you imagine the heat they'd generate with all the shite they spout?!) 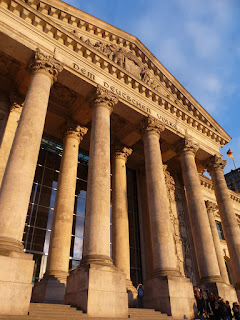 Free audio guides are also provided before you climb the walkway. They point out what buildings and sights you're looking at although obviously there's a bit of coordination involved. I didn't know what I was supposed to be looking at half the time. Go easy on the Glühwein beforehand though, and you should be okay.
There's information on the building's tempestuous history, from the proclamation of the republic in 1918, to reunification in 1990, with some great old pictures featuring wonderful moustaches. Hitler's buddies conveniently burnt the Reichstag in 1933, blaming communists to allow him consolidate power, and he subsequently conducted some of his famous rants and raves here. (Raves have always been popular in Berlin. Thankfully now they are a far more introvert affair with only direct participants and sleepless neighbours feeling any ill effects.)
It's well worth a visit. Helen was mad impressed, and she wasn't even drinking. Of course, we soon made up for that. It gets pretty chilly at the top of the dome. Even politicians' hot air is no match for the warming qualities of Glühwein.
Labels: Berlin Hitler Reichstag tourist attractions