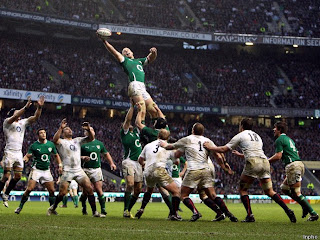 You could cut the tension with a knife. Nerves jangling and electric. So much at stake. Pride, honour, redemption, revenge. 80 minutes to mitigate 800 years. Ireland v England. In England.
I wasn't of course, but I took my seat in the Oscar Wilde on Friedrichstraße a full hour before kick off. No way I was going to miss this. The pub was full of English, offending with their presence and blissfully unaware of it, their yabber grating on the ears as I try block it out.
The pub's packed and there's a furious scramble for seats as 5pm approaches. The news from Twickenham isn't good. Brian O'Driscoll had a stomach bug and the Irish captain's presence was in question. But Declan Kidney assures us BOD is grand, fighting fit and raring to go. Thank God. I'm raring to go myself!
It's time! There's a great reception for John "The Bull" Hayes from Bruff, the big man winning his 100th cap and leading out the team. Tears threaten to roll down his face as we sing the anthem. What a man! Simply mighty. I nearly cry myself.
Boos for England, in the pub at least. Good. Good to know we're not outnumbered. May they be slaughtered in their own backyard.
Usually I leave for the English anthem, waiting in the toilets for it to end, but I can't this time as I'm minding precious seats. I look at the floor. The blood boils. Thankfully it's over soon after, and the game is underway!
It's all England. They surge forward, recycling the ball, urging it towards the Irish line. But wait! Sexton has the ball. A delicate chip ahead. A chase. And Tommy Bowe races onto it to touch down. TRY!!! Woohoo! Fucking brilliant! A primeval roar breaks out, everyone jumps up, all screaming, all clapping, wide smiles. I roar with all my might. Incredible noise. I'm sure they heard it in Twickenham. What a try! Fantastic.
There's a desperate scramble for drinks at half-time. Nobody dares move beforehand. I'm still minding the seats, but necessity for a beverage forces me to entrust them all to the care of my jacket and bag.
I get my drink and return as the match gets underway again. Fight! The dirty English have their fists flying. Picking on O'Leary, one of the smallest fellas on the pitch. Tempers are really boiling over. We all roar at the telly. "Aaaagghh!!! Kill him! Get the fuckers! Kill him!" But the Irish give as good as they get and defend their ground. A penalty awarded against England compounds their frustration.
Meanwhile some German fella's asking me if the seats I'm minding are taken. "They'll be along any minute," I tell him. The fucker's wearing an England top. Imagine! An England top! At least the English can't help where they're born, but to actually chose to wear it... And then to have the gall to wear it in an Irish pub! 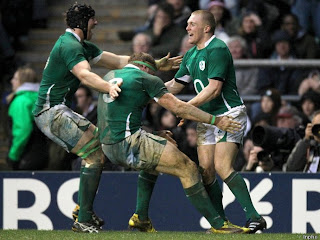 Back to the match and Keith Earls scores another try for Ireland! Woohoo! Take that! The pub goes wild again. But the conversion doesn't go over. I hope these misses don't prove costly.
England are then awarded a phantom try. The referee looks as surprised as everyone else. Suddenly the sides are level for the first time. This isn't good.
Disaster! Brian O'Driscoll is structured off unconscious after getting kneed in the back of the head from Paul O'Connell in full flight. Of all people to collide with, the two-metre colossus! Pain-inducing replays are shown over and over again as the medics tend to Ireland's stricken captain.
Things suddenly go from bad to worse when Wilkinson kicks England three points in front. Fuck. It's 16-13 to the home side and there are only eight minutes left.
The German fella's friend, also in an English top, asks again about the seats. "They'll be along any minute," I repeat, still minding the seats for people who don't show up. He sees my look and doesn't ask again.
Ireland go on the offensive. O'Gara kicks it forward, a lineout, a shimmy, a pass, go on, go on, go on, suddenly Tommy Bowe is through! Like a rocket, he breaks through tackles to cross the line. TRRRYYYYYYY!!!!! Aaaaaaghhh! The pub goes ballistic. Aaaaaaaghhh! All scream, shout, roar. Two Wexford girls, who took the spare seats just as I thought I'd have to give them to the English-supporting German lads, scream and hug and dance. Wooohooooo!!!! Woohoo!!! 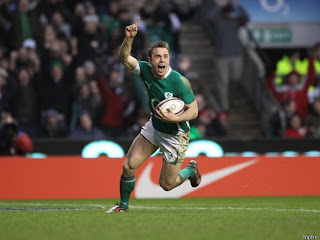 Only five minutes left. The tension is unbelievable. England are throwing everything at Ireland in a bid to score a dramatic late try. Desperate defending. They're almost there! Unbearable pressure. Can't be healthy. Finally Ireland turn the ball over and kick it out. It's over! Woohoo!!! We've done it. Thank Jaysus, we've done it! I'm shaking with excitement and relief, heart still pounding, sweating, hoarse and knackered. The Fields of Athenry is belted out as all savour the moment.
Getting beaten by France was bad enough, but it would have been a travesty if England had done the same. It was close, but we won. We won and that's all that matters.
Labels: Ireland pride Rugby