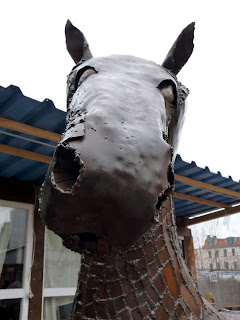 Cling-film in Germany doesn't actually cling. Instead it flops pathetically to the side of sandwiches practically inviting them to run around your bag, pocket or whatever your chosen method of sandwich-transport is. It's actually clingless.
I know this because I've been bringing homemade sandwiches into work for the last week. Sliced bread with a few scraps of cheese and cucumber or tomato (both if I'm feeling luxurious), a healthy sprinkling of pepper, yum! (Only yuppies can fork out €2.30 for a belegte Brötchen everyday.)
Forget about wrapping them though. The alleged cling-film is allergic to itself, actually going out of its way to avoid contact with any other parts of cling-film. German cling-film is definitely the most anti-social, bringing shame on the rest of the cling-film community. As alien to clinging as a Klingon is to a dog.
I'd been bringing my sandwiches loosely wrapped in this abhorrence, further wrapped in a plastic bag, only to have to scoop out what remained of my sandwiches at lunchtime. A bag of crumbs and cheese and cucumber would be a fairer reflection of what I'd been eating. With a couple of handles I could have strapped it behind my ears and eaten from a real nose bag.
On Saturday I was given a lunch box. Problem solved. Today was sheer luxury as I had intact sandwiches for lunch. Just don't talk to me about German cling-film (or plastic wrap or cling wrap or whatever it is you call it). Frischhaltefolie auf Deutsch apparently but Frischhaltefolly would make more sense.
Labels: cling-film