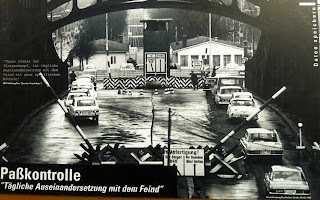 It's mad the shit which went on in Berlin. And I'm not talking of dog doings this time but the doings of people, the happenings of the past. The city never fails to entrance and impress, whether it's events, sights, attractions or just the macabre but irresistible past so blindingly dark it will never be comprehended. (Yes I know dark cannot be blinding, but in Berlin the darkness is blinding.)
Deborah and Richie were over last week, the latter causing consternation wherever he went. A Dutch waitress, on revealing her nationality, was told: "Ruud Gullit, clogs, windmills, tulips, dams. We're from Ireland - your go!" Flabbergasted, she stuttered and stammered until Deborah told her husband to leave the poor girl alone.
We did the standard walking tour on the first day. Up Unter den Linden where the Nazis used to march - "Wow, it's mad the shit which went on here," as I'd hear more than once on their visit - past Bebelplatz where they burnt all those books in 1933, up toward Brandenberg Tor and the Reichstag to inspect the bullet holes in the walls, and then the memorial to murdered journalists and opposition politicians beside it. 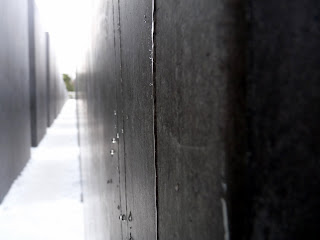 From there it was on to the Holocaust memorial, a sobering installation no matter how many Glühweins or Weißbiers you've had before. It impresses me every time, its sheer magnitude and suddenness swallowing you up before you realise you've wandered in too far. It looks innocent enough from the outside but all of a sudden you're up to your neck, and then beyond as the columns tower above. It takes much longer to get out than get in. Tears from the melting ice trickled down the columns' sides as we tried grasp its enormity.
The site of Hitler's bunker lies nearby, now a carpark and aptly covered in dogshit. Enough said. We needed a Bier after all that, but stumbled instead across the Stasi Ausstellung (exhibition) on Mauerstraße. More mad shit to digest as we got a taste of what it was like to live under the shadow of Staatssicherheit der DDR. 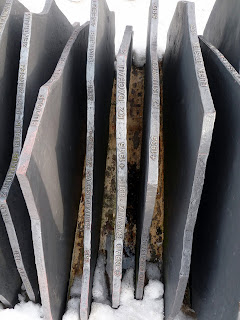 We later made our way to Oranienburgerstraße where the hookers ply their wares and more besides and where the synagogue is still protected by 24 hour security. Again a contradictory reality. There's only so much madness you can take however and we were happy just to finally get our Biers and talk of totally unrelated matters, Connemara and the future of Irish as a language, Richie telling us of his optimism for same, and then how he and his brother "saved and stole" as five and six-year-old kids to buy some sweets or cake in the local shop. The miserable shopkeeper cut it to reflect exactly the ha'penny they had managed to gather. He was surprised he could recount a story 25 years old, but the wounds will evidently still take a while to heal. "The fucker wouldn't just give us the thing, but cut three-quarters of it for us!" He was still outraged, unhealed wounds not allowing him forget. Just like in the city he was visiting.
Labels: Berlin dogshit Hitler Nazis Stasi tourist attractions