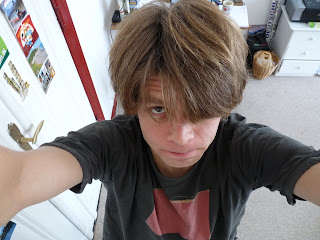 I was blind but now I can see. I can see! I got a haircut today, long overdue, putting both my eyes, and the eyes of people who have to look at me, out of their misery. Mine had been shackled behind a curtain of hair which made the Iron one look like a party, while anyone else's were looking at a haystack.
Yeah, my hair was just ridiculous. It had really been pissing me off. I mean really pissing me off, constantly in my eyes, poking them, stabbing them, while it flared out at the back as if trying to bring back the 80s. I know I'm in Germany now, but even Germans were telling me I looked like something from the 80er Jahre.
"They made a balls of it," I told Helen when she was over, pushing it to the side to make sure she was still in front of me.
"Yeah, they did," she agreed straight away. I was shocked. Irish are never usually so brutally honest. I thought she might have said "ah, it's grand", or "it could be worse", but I'd never have expected her to be as straightforward as a German. It was then I knew it was really bad.
Mandy, my first flatmate in Berlin, recommended Haartari on Bänschstraße 52, run some gay guys who knew all there was to be known about hair. That was enough for me. Gays are the most fashionable of the species and if I wanted to be up there with the shakers and groovers of Berlin, I was happy to entrust myself to their care. (You can see them here. My fella's on the left.)
I had to wait a week for an appointment - a week! - but I took this as a good sign. Not like strolling into Squire's or Dee's on Bray Main Street and demanding a close back and sides. Despite the long wait I was slightly late after walking into too many lampposts en route, but there were no adverse consequences.
David Bowie was playing when I arrived, always a good sign. (He wasn't actually there. Now that would have been a good sign.) 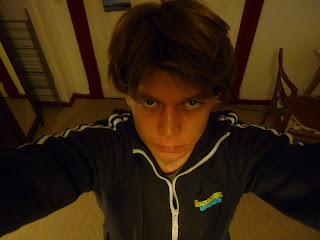 We discussed the options. I told him: "Ich will nicht wie etwas aus der 80er Jahre aussehen, aber sonst kannst Du was Du willst machen." I didn't care anymore. Anything but the 80s, and without hair in the eyes.
"Du hast unglaublich viele Haare!" he remarked. That's why I'm here buddy.
After almost an hour under his scissors, I can thankfully say I no longer have as much Haare, and I can see again! Haupt-Ding is that I no longer look like Angus MacGyver or anyone else from the 80s. Although I may have given up on the possibility of a career in Dulux adverts, I'm happy enough to look like David Bowie for the time being. As long as it's not David Bowie from the 80s, and once the Spiders from Mars approve...
Labels: hair Haircut