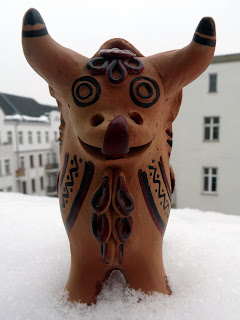 Good things come to those who wait. Apparently. I don't know because I hate waiting. Patience is something I hadn't time to acquire.
This week promises to be a long one as I wait to find if my quest for honest employment has been successful. Yesterday was the interview for the job I've always wanted. It went well. For two hours I did my best, completed the tests, said all the right things, jumped over the pitfalls, avoided the hoops and jumped through the hurdles (for variety). We chatted in German for a bit. She even knew my former boss! She showed me around, introduced me to the rest of the news team. She was still smiling at the end. "I'll let you know early next week," she said after I let her know how much I wanted the job. Early next week! As if to build up the suspense. In the meantime she'll be talking to other candidates, candidates I can only hope are not as informed, engaging, charming, witty and sharp as I am am. I know at least they can't be as good-looking. Or modest.
I can't do anything else. I've given it my best, tried my damnedest to get it, put all my eggs in one basket - I even turned down another job which I would have started today while I await the result. The die is cast. Nothing left to do but wait.

It's hard though. I couldn't even wait for it to get a bit warmer. The bike was rudely hauled from its hibernation in the cellar today, despite the sub-zero temperatures. I soon found out why nobody else has done the same. There's a reason ice-cycling is not a particularly popular sport. I might as well have saved myself the effort and just thrown the damned bike on the ground. Again, the cold killed any notions of fun. It only took three hours to defrost my hands once I came back in. 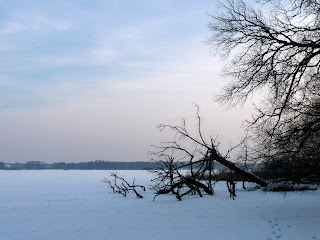 Even walking is treacherous. A few weeks ago I was scoffing at people slipping on the ice as "not being careful enough". I'd had a few slips myself since, but nothing serious. Not until Saturday that was. The day I decided to bring all the bottles to the bottle bank. Carrying two full bags in each hand, and another on my back, I just made it to the end of my street when both legs suddenly shot out from under, bags flew up, and up I went too before crashing back down on my side. CRASH!!! I absolutely snotted myself. The bottles smashed to smithereens of course, and together we made quite a spectacular commotion.
I gingerly picked myself up, dusted off the broken shards of glass, and then picked up what pieces I could while trying not to slip again. In the meantime, I avoided the gaze of everyone who'd just come out of the U-Bahn station in time to see my glorious mishap. All pissing themselves with Schadenfreude no doubt. 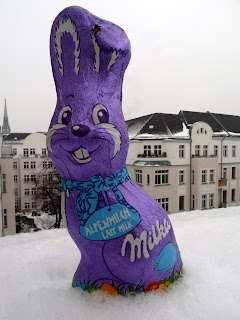 There's no let up in sight. The winter's set to continue. (-6°C as I type, -9°C later tonight.) I've been using my balcony as a fridge, perfect for milk. Last week I walked on a lake. Tegel, the second biggest in Berlin, is completely frozen over, so for once I was able to walk on water like Jesus. Of course you wouldn't catch him wandering around a forest in Berlin when it's -10°C outside, especially in his trademark sandals.

Even locals are losing patience with the winter now, looking forward to warmer times. Today I saw Easter bunnies for sale, despite Easter being almost two months away.
(Thousands of chocolate bunnies are murdered every year für Ostern in Germany. It really is quite disturbing, especially for the children who can only console themselves by eating copious amounts of chocolate.) 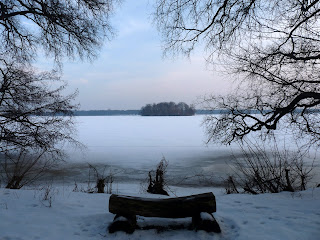 Also in the supermarket (no lack of material from the supermarket these days) was the "Gurke des Jahres" (Gherkins of the Year). Germans take their gherkins very seriously and I wonder what these gherkins did to win such a prestigious honour. I presume there was a Lovely Gherkin competition where they all had to either sing a song, recite a poem or tap-dance to impress the judges. In any case I'm looking forward to finding out what makes them so special later on. In fact, I can't wait.