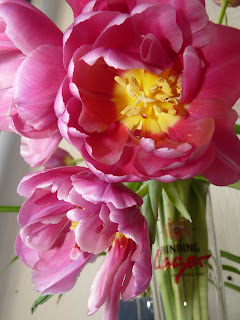 Berlin's slowly chipping away at my manliness. Just five minutes ago I asked Jenny if she had any handcream because mine had run out. Handcream! But my hands are chapped red raw and scraped to bejaysus, an unfortunate consequence of this incessant bitter cold. I'd been putting up with it to maintain my carefully cultured machoness, but it got to the stage where the skin broke and my hands were actually bleeding. That's bleedin' enough I said to myself, before smothering them in some free sample of hand cream I found in the bathroom. I could never bring myself to buy such a thing.
That's run out however, and my hands are now worse, if anything, than they were before. I'm now faced with an uncomfortable dilemma - leave my hands crack up and flake away to stumps, or swallow what's left of my pride and buy some handcream.
That's not all I'm afraid. This afternoon I was given a bunch of flowers which are now sitting prettily in my room. And I confess that I had already bought some cream for my face. That's right, I bought some cream for my face. Christ knows I'd have a face like a walrus's arse otherwise and I'd rather be accused of being a hermaphrodite than have a face like a walrus's arse.
I haven't started wearing skirts or high heels just yet (too cold even if I wanted to), and nobody would look twice at me if I did. In fact, I'd probably fit in better if I did take to wearing lipstick, high heels and displaying my man-boobs for all to see. 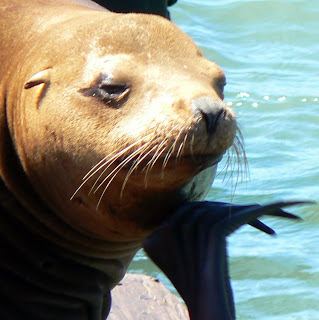 Berlin seems to do that to people; it blurs the boundaries between the genders and adds a few more. Half the time it's hard to figure out exactly what species of person you're looking at all.
To dissuade any possible confusion I haven't shaved in a week. Another weapon to combat the cold too. I now sport enough bristles for people to accuse me of growing a beard. I'm not comfortable with the idea however. I've always suspected men with beards of having something to hide. And in this city where women have beards and men have handbags and pink poodles, I'm not sure it makes any difference anyway. Time to get the razor out.
Labels: Berlin cold hair Life