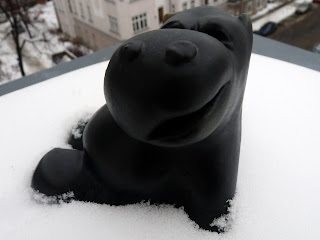 The snow's gone! Gone from my balcony in any case, so I'll no longer be able to take convenient pictures of rabbits or hippos in the snow as before.
The snowmen were right all along. They'd been warning Berliners of the dangers of impending doom and global warming but nobody listened, nobody gave a damn, nobody paid any attention at all. Sure why would they when the city's been clasped an an icy grip not felt since tattooed woolly mammoths used to congregate on Alexanderplatz to drink cheap beer and display piercings in areas no mammoth should be pierced?

Yesterday I learned that the equivalent of 45 elephants' worth of snow has fallen in Germany for each man woman and child this winter. Forty-five elephants! I heard it from a watertight source. Wenke, who'd heard it on the news, said it at a party. She seemed pretty sure of her facts and I've no reason to doubt her, so that's good enough for me. She wasn't sure of they were big elephants or small elephants, African or Asian, or even what the average weight of an elephant is, but I think it's fair to say 45 elephants' worth of snow is quite a lot of snow indeed.

But now the big melt is underway, much to dismay of the snowmen whose dreams of surviving the spring are cruelly turned to slush each year. I myself am fully responsible for their demise, for the melt began at the precise moment in time my new gloves arrived in the post. It goes without saying once you buy something it's no longer needed... It was the same last year when I banished winter away with the purchase of a new jacket. 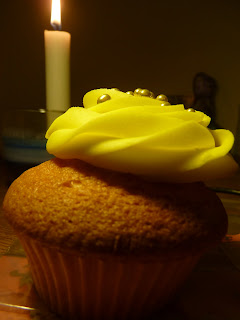 Also gone is Hédi, my Zwischenmieter from Switzerland, who'd been caring for my strawberries and kiwi plant while I was off gallivanting in South America. She stayed an extra month to ensure a smooth transition for the plants. For her farewell we went to her favourite restaurant, Pink Flamingo (as if there were any other type of flamingos out there), where the pizzas are cooked under the supervision of a dog in an armchair and served in a variety of ingredients in bewildering but delicious combinations. Mine had ham, lime, onion, coriander and fried bananas and that was one of the normal ones. Yum!

My other flatmate, Wiebke, is moving out too, back to Friesland. Evidently not cold enough for her here. So no more theologans' parties with limbo dancing and swimming naked in the Spree. Maybe that's a good thing. In any case, we now have to get a new flatmate, so there'll be a queue of freaks outside the door once we place an ad on the internet. Hopefully we'll be able to find one who's semi-normal at least.

I still haven't heard if I got the job. My patience snapped last week and I rang to find out what the story was. Apparently they've been so busy they haven't had the chance to further the procedure so I'm not sure if that's good news or bad news. I figure if they're that busy they could just be done with it and give me the damn job but it doesn't seem to work like that here. She said she'd have news for me early next week but then that's what she said the week before...
Anyway, I promise not to write any more about it until I find out if I actually get it or not.
Labels: Berlin cold snow work