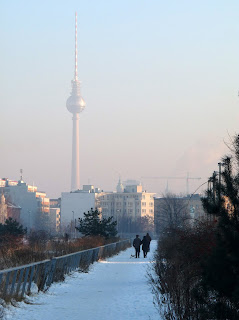 Jesus it's cold. Damn cold. Colder than cold. It's inhumane how cold it is. I've never been as cold before in my life, and am now seriously questioning the wisdom of my moving here to begin with. Sure, Berlin's great in the summer, but what if you don't survive the winter?!
It's so cold it actually hurts. I haven't been out much since we got back last week, but enough to realise it's not worth the while. Clothes and jackets make little difference. On Sunday I wore three pairs of socks, heavy boots, and still I might as well have been wearing flip-flops. I've taken to wearing two jackets, and still I'm nowhere near warm. Gloves are pointless, jumpers insufficient, hats a waste of time. It's ridiculous!
Anytime I go out it's like someone left a tap on in my head. Streams run from my nose without a thought for decorum or etiquette. Even those streams freeze to a standstill after a couple of minutes. Seriously! Frozen nose matter is a new one for me.
Sunday I thought I was going to die. Really. Shaking uncontrollably, my face numb, arms like icicles by my side. The pain is ridiculous. A few minutes exposed to the elements and the face begins to hurt, stabbing and throbbing and hurting like hurt. 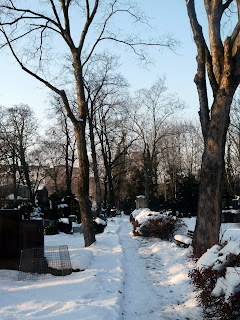 The only thing worse is the pain when you come back in to thaw out again. Hands red raw, stinging, pulsing with pain, aching and complaining. Aaoooowww!!!
I licked my lips today, and a matter of seconds later a thin film of ice had formed there already. Tonight it's supposed to drop to -21°C. MINUS TWENTY-ONE!!! Thankfully tomorrow the temperature will rise to a positively balmy -9°C, when we'll be warmed up by some heavy snow. I never looked forward to being warmed up by snow before.
To make matters worse I've run out of Barry's Tea. I'm on my last cup of Onno Behrends Schwarzer Friese Tee as I type. How am I going to fend off this blasted cold for the rest of the winter? I was offered thermal soles the other day to help me cope. Thermal soles! It's a thermal soul you need to live in this place.
Labels: Berlin cold snow Tea weather winter