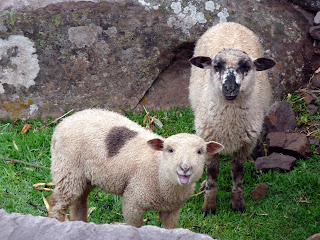 We may be living in South America a bit longer than planned. I just found out this morning - by accident - that the airline company with whom we're supposed to be flying home, has gone bust. Bust! All flights cancelled, their fleet impounded, thousands of passengers stranded. Air Comet went bust on December 22nd apparently, when the Spanish government revoked the Madrid-based joke of an airline's licence due to huge mounting debts. Good timing lads.
Passengers hoping to fly home for Christmas were left without any way of doing so. 7,000 are affected. Riots ensued apparently, with Madrid's Barajas airport blockaded, passengers in Ecuador and Colombia going on hunger strike, while here in Perú, they forced their way into the Spanish embassy to demand a way to get home.
This, I learned this morning, by chance, while I was researching the best way to get to Machu Picchu. I wasn't even sent an email. I suppose we would have just turned up at the airport next week like idiots, to find out then we didn't have a flight home.
So now we've no idea how we're getting home. Air Comet's website has no information at all. Their phones are going unanswered. Lima airport's phones are going unanswered. Iberia (a possible alternative) are not picking up either. There is no information anywhere on the internet on how stranded passengers are supposed to get home. Any suggestions?
Labels: airlines Bad service