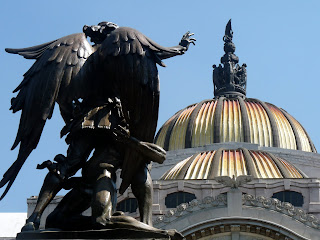 There was a final sting in the tail before we left Perú. A "departure fee" of $31 which had to be paid if you wanted to leave the country. The final rip-off, and a parting insult to ensure we leave with a bad taste in the mouth. It comes on top of the taxes already paid when purchasing the airline ticket. I vowed it would be the last contribution I make to the Peruvian economy.
Even then it wasn't a straightforward process. I guess they don't want to let go of the tourists that easily. Not only were we waiting about 20 minutes for the privilege of paying the tax, but there were so many security checks and so much bureaucratic bullshit, we only got to our departure gate as last call was being announced, despite our turning up at the airport three and a half hours before departure! It was the earliest I have ever turned up for a flight. 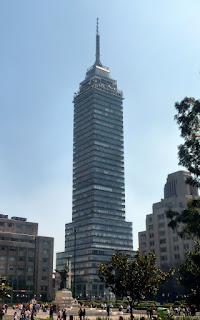 As soon as we stepped aboard the AeroMexico plane however, things improved dramatically. Good professional service, TVs you could decide whether you wanted to hear or not, and a complimentary bar - as much cerveza and tequila as you could drink! Unfortunately I wasn't able to take full advantage due to my eyes' inconvenient desire to close.
Now we're in México City, the big DF, where despite the incredible hustle and bustle of 21.2 million people living in the same place, we've actually found time to relax for a few hours. México is just great! Strolling through the Zócalo, browsing the food stalls and their irresistible attractions (tacos, tortas, tortillas and other wonderful dishes whose acquaintance I'm more than willing to make), and just bathing in the warm sunshine filtering through the trees in the park. Y 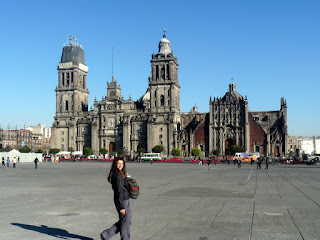 es, it's great to be going home. But suddenly there's no rush any more...