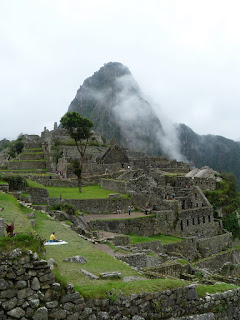 Very few things will get me up at 3am after 3½ hours' sleep. Much less when faced with the prospect of trekking for hours in the dark before even finding out if my trek was successful.
But that's what you have to do if you want to be among the first 400 people at the gates of Machu Picchu to secure a coveted ticket to climb the imposing Wayna Picchu mountain just behind. "You have to climb Wayna Picchu. It's the best thing there," Cato had told us before we left Cusco the day before. Of course he didn't tell us he had gotten the bus up to the sacred site. 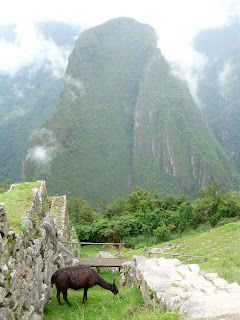 So we set off down the dirt-track without breakfast, armed with our flashlamp and headaches. It was already 3.50am (I'm very slow in the mornings) and we were worried we were already too late. Soon we passed a few stragglers on the road. That made us feel a bit better, but our pace was unsustainable and we were already out of breath before we'd even started climbing.
We came to the bridge, water gushing underneath with tremendous velocity as it had been last night on the way to Aguas Calientes. Now we were going back the way we had come, I was questioning the wisdom of paying for a hotel room for just a couple of hours' sleep.
We got to the steps up the mountain and soon all thoughts at all were gone from my head. Just huffing and puffing for breath as one steep step followed another. Up and up we went, step after never-ending step, knees and joints complaining all the while, and still we were nowhere where we needed to be. Up, up, up, step, step, step, hands on knees for support - it wasn't long before we were completely knackered. We overtook more stragglers and were in turn overtaken by more. 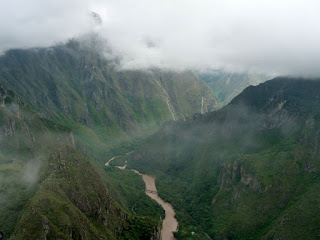 Still we slogged on, the number 400 driving us up the mountain. Imagine being number 401 and going through all this for nothing! The thoughts of it whipped us on and on, up step after step.
After 40 minutes my legs were shaking, Jenny's too, and the backpack on my back was getting heavier by the minute. Rivers of sweat were cascading off my forehead like the river left by the road behind us. And still we went on. Christ, it was never ending! We must nearly be there now, I thought after another ten minutes' slogging, but we were nowhere near the end.
We passed more and more passed us as our resources of strength were pushed to their limits. I looked up to see if we were near the finish, but all I could see in the dark was shadows of trees. 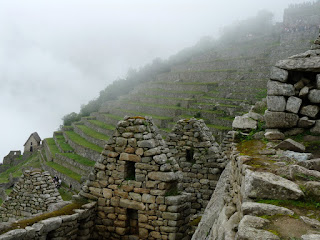 Suddenly I heard voices and laughter up ahead. That must be it! An end in earshot. It gave us fresh impetus. Conquest within touching distance. We hurried up and up, the last steps a little bit easier as we sensed an end to the suffering. We turned a corner, came out to the trees, and found ourselves in a clearing. A line of people waiting patiently. We'd made it! Woohoo! We ran to the end of the line and prayed there weren't 400 people in front of us. It had taken us an hour and 45 minutes from Aguas Calientes and we sure as hell didn't want the disappointment of finding it was all for nothing. 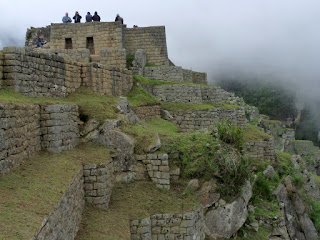 It was 5.05am, and the ticket office opened at six. More people came and joined the queue behind us and the anxious wait began, all praying to be under that magical figure of 400. How many people are in front? They asked. I don't know. It could have been 200, could have been a thousand. Stragglers hoping to join their friends already in the queue were met with outrage and quickly heckled out of it again. Nobody wanted to lose their place to some queue-skipping fuckbag.
"Take it easy," they'd say once the barrage of abuse became to much to bear. 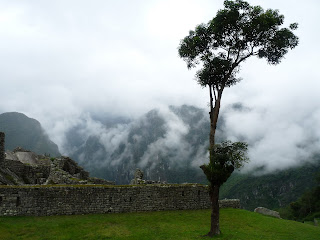 "Other people are waiting here before you. If you wanted to get here earlier you should have got up earlier," I told one girl who was particularly put out she wasn't allowed jump ahead.
Excitement builded as we waited until six. Daybreak struggled to make an impression through the clouds, but we could clearly see the line was bigger than previously thought. How many people are ahead of us? Stop asking me that, I told you I don't know!
We eventually got to the gate. Ticket number 326. Phew! What a relief! It had all been worth while. Wayna Picchu here we come. 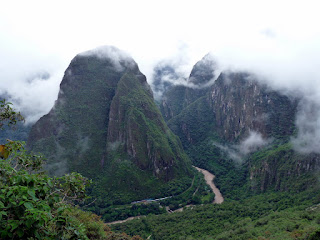 Peruvian conservation tactics means only 400 people a day are allowed visit Wayna Picchu, the mountain behind Machu Picchu, while unlimited numbers are allowed visit Machu Picchu itself, the site which actually needs the conservation. When each tourist is charged S/.126 (€31.50) to enter, it's easy to see why. (Despite the fact it was rediscovered in 1911 by a foreigner, Hiram Bingham, foreigners are now charged twice as much as the locals.)
We entered, and were met with incredible views of the mountains across the valley. Crowned by clouds, they rose up at impossible angles, their pointy peaks poking through, reaching to the Inca god Inti, known to the rest of us as the sun.

Finally we see Machu Picchu laid out before us, or at least what we can of it in all its mist and cloud-obscured glory. Stones shrouded in mystery, I can see it's not what it used to be. These ruins are ruined! 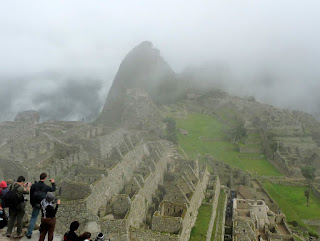 We stroll around and find roofs missing and no doors to keep out the draughts. No wonder the place was abandoned.
(Nobody actually knows why the place was abandoned. It was most likely left to the jungle foliage long before the Spanish arrived, thus ensuring its "preservation" as they never found out about it. I'm sure if they knew of the hardship required to actually reach the place, they wouldn't have bothered either.)
All the tourists gathered at the top overlooking the shrouded site, poised with their cameras waiting to take a picture which never came. Defied by clouds protecting the site's modesty. 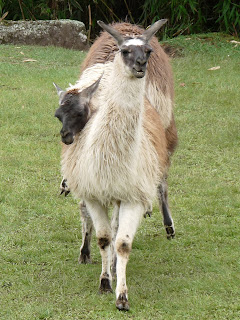 We stroll up to the main plaza and again discover it's ruined. These people just don't know how to look after their ruins. Tourists ooh and ah over fallen rocks, but I'd much rather have seen it in its hey-day.
A couple of mating llamas provide some entertainment before the female decides she's had enough, much to the tourists' and male's disappointment. I guess she'd rather have had some privacy.

We see the Intihuatana-stone, a sundial thing Inca astronomers used to use to predict the equinoxes. Or so they say. They've no idea how they did it, so how do they know they did it at all?! These archaeologists would swallow any old shite the Peruvians tell them.
I guess the Spanish couldn't figure out how to use the others they found in other Inca sites. No wonder they smashed them all up.

The Incas could build damn good walls but they didn't do much else from what I can see. Their time of eminence only lasted about 100 years. Apart from building walls and temples in inaccessible places, they managed to conquer (or bribe) a few other tribes and were in turn conquered by a handful of sailors from a land thousands of kilometres away across a different ocean. 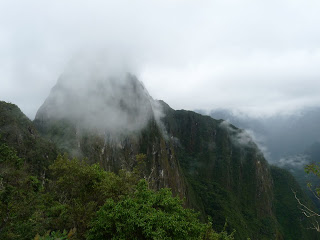 Machu Picchu itself is nice if you like looking at rocks, but the real beauty is in the setting around it: the impossibly-steep mountains, the lush jungle, the majestic fiery river curving its way around it. The ruins themselves are just like any other in Ireland or elsewhere, and the Incas just happened to pick a nice location. Apart from that, I'm afraid it's Mucho Picchu about nothing.

All the pictures from Machu Picchu can be oohed and aahed at here: http://picasaweb.google.com/faheyc/MachuPicchu#
Labels: abandoned buildings Cusco Incas Llamas Machu Picchu Perú