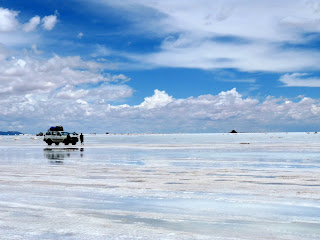 Incredible haunting beauty. I've never seen anything like the salt flats of Uyuni before - floating mountains far away above a shimmering mirror, unending, unbeginning, starkly startling. Just mad.
The Salar itself is ridiculously bright, a brilliant white expanse no horizon. For as far as you can see, just whiteness, a pristine freshly-ironed tablecloth, unsullied, untainted, pure and heavenly. 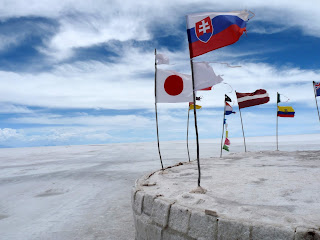 We got out of the landcruiser to get our feet wet in the water. Crunching in the salt, lapping the pools. This is fucking brilliant! I run around like a cat released from a cage, savoring the feeling, gorging on the freedom of amazing nothingness. I taste the salt. It's salty. I wash my hands and face. It scrapes, but it's great. I'm absolutely covered in salt. It stings my eyes, burns my lips. It's great!
Everyone poses for arty photos, lifting arms and legs, jumping, squatting, stretching, playing with the dimensions of an other world. 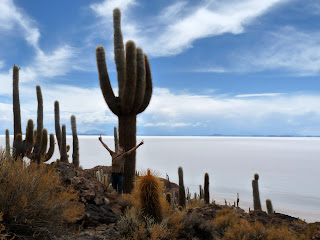 Soon we come to the beautiful Isla Incahuasi, a rocky island in the middle of the Salar, where thousands of cacti stand isolated from the outside world, seeking comfort in togetherness.
We dive into the island and abandon the path at the first available opportunity. We're rewarded very quickly by coming face to face (not literally, too painful) with some of the most impressive cacti I have ever seen. They stand defiantly tall, proud of their survival where nothing else grows. Stretching up and up as if trying to see the edges of the great Salar around it, they reach heights of five metres and more. Growing just 2cm every year, they're here hundreds of years, long before the landcruisers first started bringing admirers.
I hop around from rock to rock, careful not to brush against them or come too close. Jenny, unfortunately, gets nabbed by one. There's too much beauty for sympathy however. 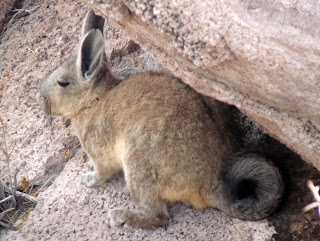 "Today is a day for which cameras were made," I tell her, bounding ahead or more rocks and snapping like a crocodile. I'm happier than a pig in birthday shit. I've discovered the world's greatest island. The sun burns though. All the tourists are tomatoes, heightening the contrast against the brilliant white around us.
I see a rabbit-like fox, the best of both worlds. Apparently called a vizcacha, it scampers away across the rocks to escape my curious camera lens but I catch him all the same. Fantastic. 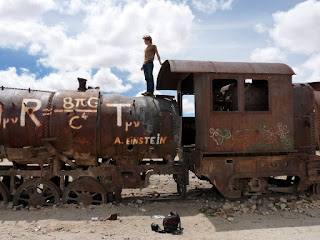 Earlier we had been to the train cemetery just outside Uyuni where great hulking lumps of iron are abandoned, left to rust to oblivion.
Old steam engines, their best days evidently long behind them, they lie there neglected and unwanted, a curio for warped visitors who take pleasure from the plight of rotting trains. Zugschadenfreude.
Now they're part of a playground for passing tourists, posing and feckarsing about with no respect for the trains' former glory. I find it impossible not to feel sorry for them.
For more pictures see: http://picasaweb.google.com/faheyc/TrainGraveyard# 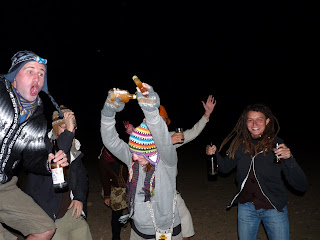 After traversing the great expanses of salt, we finally come to our Hotel de Sal, where I verify its authenticity by licking the walls. Yeuch! Why couldn't they build a pepper hotel?
We settle down for the night and pass the time with a pack of cards, Bolivian whiskey, wine, beer and rum. The potent mix causes us to run around through the pampas in the dark, jumping over the little bushes or running through them, chasing llamas and yelling like wild animals or demented idiots.
Unfortunately I don't remember chasing the llamas very well, but my camera provides the evidence to confirm the stories I'm told the next day. 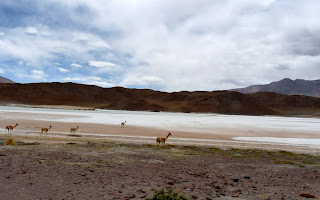 The next day I'm hungover to bejaysus. We drive to Vizcachita where there are mad rock formations shaped by the wind and perfect to climb.
It's a desolate place, with the mountains of Chile just behind. Nothing grows save for a few hardy shrubs.
The wind howls and whistles through gaps in the rocks, but it doesn't blow the hangover from my head. Sand and dust abound, whipped up by the wind. Vizcuña on the outskirts seeking to get away from it all graze what little tit-bits they can find. 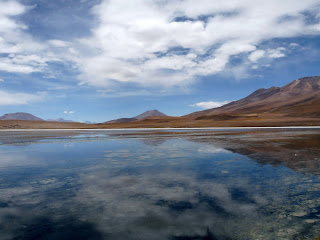 We drive on to beautiful lagoons, mirror lakes in front of perfect cone mountains, where flamingos pose with confidence. Pink is in fashion apparently. They strut around and stand on one leg. Show-offs.

We come to the point where Bolivians take advantage of tourists through legal theft. B$150 to pass through to look at the next lakes.
The price put up from B$30 four days before and applicable only to foreigners. Shamefaced discriminatory extortion. 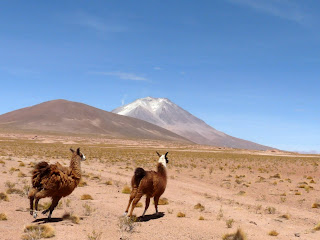 I save their consciences by making a break for it with Cato, the Aussie. We stroll past the border guards and head towards Laguna Colorado. Once we get past the low hill, we crouch down to escape their probing glances, sitting in what may have been flamingo shit. After waiting what seemed like an appropriate period of time, we make another break for it to a little shed a bit further on. We pause for breath once we're out of sight, and run to the village up the road from the checkpoint. There we get to another unused shed further on, and we shelter from the bitter wind.
Like Butch Cassidy and the Sundance Kid who used to roam these parts, we glance furtively back towards the border. 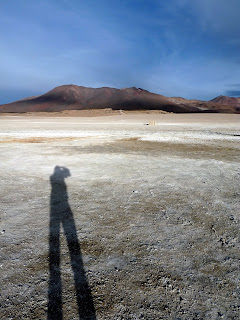 We see a guy in a blue uniform coming down the road towards us. Fuck! He turns back in towards the village. False alarm. Through a gap in the bricks I peep out for any sign of our vehicle or the border guards. But nothing comes.
We wait until we can wait no more and walk back towards the village. A six pack of beer and we duck into another building to escape the cold while we await our pick-up. I open the can in the hope it will help with my raging hangover. But it doesn't. And still we wait, sheltering from the wind and keeping an eye out for the guards.
Eventually we see movement at the border post. Vehicles are coming through! They zoom past us however, dashing our hopes of rescue. Finally, after thoughts of settling down for the long cold night pass through our heads, our jeep finally arrives. Doors fly open, we jump in, and away we go. We'd made it! 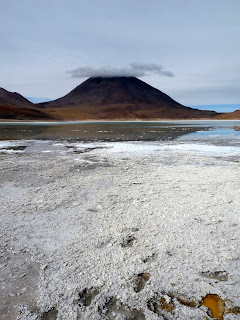 Early start the next morning. 3.30am. Half an hour later we're on the road again, everyone knackered. A dark and bleak road, we wonder what the hell we're doing up so early. We get to the geysers just as light is threatening to break. Steam everywhere rising out of the murky depths. Whoosh! Someone left the kettle on, or took a piss on a cold cold morning. Through the eerie blue light we see great spouts of steam rising from the ground. I go for a closer look and slip on the greasy muck. Shit! Better stay put. I dare not go any closer. But it's a wonderful sight - what I can see of it. Steam just whooshing out of cracks in the earth. What mad things are going on down there? I survey the spectacular lunar landscape, craters and fumaroles. Wouldn't want to slip or fall. There've been nasty accidents in the past - curious cats getting their paws burnt. One slip and you're brown bread. But it's time to go again. Were at 5,000 metres and the cold is biting. 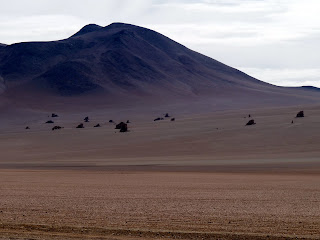 We continue on to the remote Salvador Dali desert complete with his rocks. Apparently he came here for inspiration before any tour group ever dreamed of visiting. And why not? It's certainly impressive.
We're looking at the Montañas de Siete Colores. Muddy browns, reds, whites, blacks and creams. Surreal pointy mountains with jagged edges surrounding dusty dry dunes. Clouds of dust are suspended in the air, scattered around this rock-strewn sandy desert. A volcano dead ahead, spectacular as it catches the first rays of the sun. Nothing moves, nothing lives. Not even an auld cactus. It's just too remote, even for the rain. 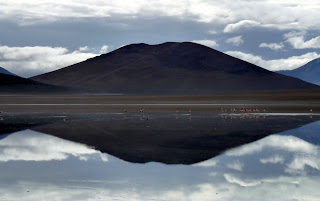 Laguna Blanco is a mirror reflecting the mountains behind. Flamingos chatter and skwawk among themselves, discussing the latest fashion trends. Other birds too, trying to keep up. Fringed by soft white sand, I go for a closer look but sink as I get too close. Shit! I hastily retreat and learn it's very dangerous to walk here, quicksand lurks. Now you tell me. But the lake's incredible beauty lures the visitor ever closer.
We move on to Laguna Verde just nearby. Nestled neatly in front of the imposing Volcán Licancábur, its turquoise sheen captivates and enchants. I move closer towards its white fringes but quickly discover one shouldn't wander too close here either. I move back before I sink any further, and content myself with observing from a safe distance. 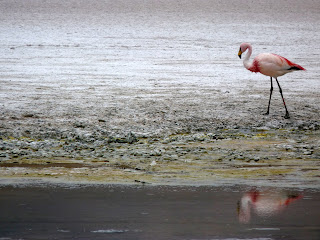 A cloud cooperatively crowns the volcano and the sun casts early morning shadows across its bow. It's beautiful. Even the flamingos don't dare compete.

On our way back we pass through more desolate land, lonely and stark. Coloured by the wealth of minerals, red, brown, cream and white, its great expanses are punctuated by jagged peaks, its rolling hills lapped by gentle lagoons. This is wild country, but great. We're privileged to see it, happy to feast on such untamed beauty. Go reader, go. Go see it for yourself. Just be careful what tour agency you choose! 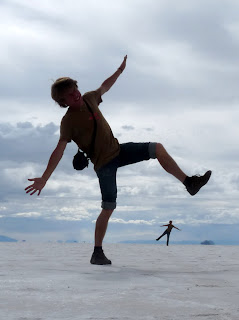