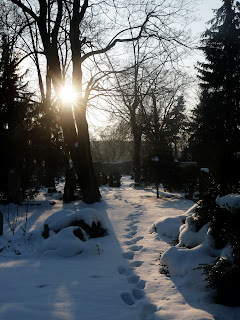 Home at last! Endlich zurück in Berlin. We made it after much toing and froing (more froing than toing, very little getting), but we made it all the same! From México to Madrid, where we spent a very pleasant evening with my parents (rabbit stew for the non-vegetarians), before we finally boarded the flight home.
I slept all the way, my body now conditioned to sleep anytime I'm on a plane. It's more likely the instinctive desire to hibernate however. It seems the only way to survive Berlin in the depths of winter. It's fucking freezing here! Literally. 'Twould freeze the arse off a brass penguin. Minus seven yesterday, minus 12 at night. I heard on the radio it was to drop to minus 20 tonight. MINUS TWENTY!!! These Germans are mad. It's a biting cold, sharp and sore, permeating and unavoidable. Christ, it's cold. Teeth chatter, lips go blue. There's just no escape! Snow and ice choke the streets and everything is covered in a blanket of white. I'm seriously considering stocking up on pistachios, finding a nice cave somewhere, and just sleeping through it all until the weather improves in April.
At least it's dry though. It's not the same miserable wet and windy cold you get in Ireland from which the only respite is the pub fire and hot whiskeys (always a good excuse). Here Glühwein is the antidote of choice (no excuse needed), or simply staying indoors - Berliners are prepared for such inhumane winters and have shackled the chills of winter outside with good strong heating inside.
After getting home, I was delighted to find some teabags had survived the four months I was away. Barry's Tea! What more could you want? We'd also been at the supermarket at Friedrichstraße where we stocked up on black tea from the appropriately-named Friesland region (the whole country should be called Freezeland). It's not as good as Irish tea, but certainly better than the English muck a lot of the misguided locals drink. We also got some Inka Tee of which, strangely enough, no trace can be found in Perú. I'd say the poor ol' Incas never heard of their supposed tea. Feck it, it's tasty though, and warm which is the main thing.
Attention now turns to getting some work. My finances took a bit of a battering over the past few months, especially after having to fork out for unplanned airline collapses, and my bank account has now reached the quite unhealthy low of €-962.20. Everything's in minus figures around here. 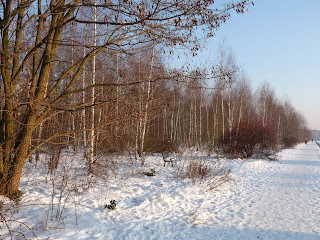 What a Waster comes to mind. (I just heard this on the radio for the first time about half an hour ago.) Maybe I can flog a few articles, but I'll have to supplement that with more realistic work if I'm going to keep myself in pistachios until April; perhaps teaching English, some bar work, prostitution, whatever it takes. At least the latter would have the added bonus of keeping me warm.
Meanwhile, I also have to update this thing with photos from the last four months. More pictures, less words will be the order of the day, until it's fully up to date starting with posts from September. This also has the benefit of keeping me indoors.
I'll just stick the kettle on first... Another cup of Barry's Tea. Snow joke, it's ice to be home!
Labels: Berlin cold Tea weather work