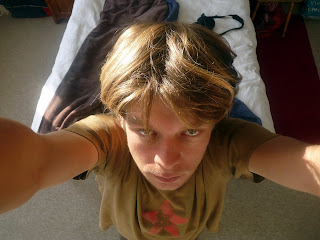 First order of business was taken care of today - the haircut! It was getting ridiculous - there wasn't another moment to spare. Even my parents reacted with shock when they saw the mop on top of my head a couple of days ago. "Jaysus, you need a haircut!" Not even a "How do you do?"
The comparisons had become more wide-ranging and insulting in recent weeks. Predominantly from the 80s of course. Even some gobshite with huge teeth, an arse for a face, and hair from the circus pointed to my sprouting cranium the week before, eyes wide with wonder, mouth agape. "Wow man, time for a haircut!" he informed me. Cheers pal, time for a facelift I thought to myself. But I smiled politely and thanked him for his helpful comments.

Before that I'd been called Jon Bon Jovi, Luke Skywalker, Che Guevara (but that was just Jenny trying to plamás me after I complained all the comparisons were from the 80s), Ewan McGregor, and then Prinz Eisenherz whoever the hell he is. At the rate I was going it wouldn't have been long before someone called me an Ewok so it was imperative that drastic and prompt action was taken.

In Perú hairdressers have seats from the fairground, saddles on stools with horses' and other creatures' heads in front. I presume it's the only way they can get the locals to sit still, but I figured if they concentrate so much on keeping their customers quiet, then they probably hadn't gotten around to the art of the actual haircut itself. In any case, I wasn't taking any chances of looking like a Peruvian.

So on return to the sanctuary of Berlin, I booked myself an appointment at Haarschneiderei to have my Haare geschnitten werden post haste. I was particularly looking forward to be able to see what is in front of me for a change.
My Haarschneiderin, Lilly, tackled the task at hand with gusto this afternoon, quickly determining that I'm not a native Berliner due to my comical accent. Apparently my German is very good for someone who has been living here (or not as the case may be) for as long as I have (almost two years!), but I make all the usual mistakes English speakers so when "making an arse of" German. 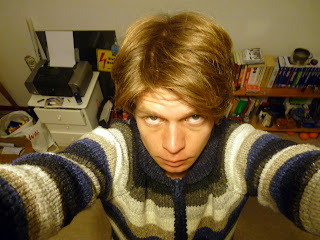 I told her it wasn't my fault her language was so particular, and she told me not to worry, that my German is "niedlich" (cute) und "süß" (sweet). I guess I should be thankful Germans like having an arse made of their language. I know Jenny gets great entertainment from it and others too.
In any case, I still haven't decided if Lilly made an arse of my hair or not. It's still in my eyes would you believe, but she said she cut the rest so it would go to the side and not be blocking my view anymore. Damn it, it's cut now, one way or the other. At least no one can call me an Ewok.
Labels: German hair Haircut Language Perú