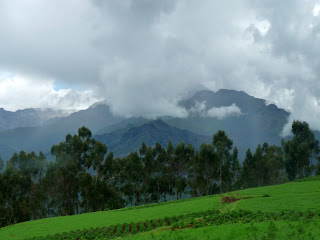 Peruvians being the way they are, there's no way to get to Machu Picchu without getting fleeced ($400 to $500 for the Inca trail) or going through a helluva lot of hardship. Being creatures of limited means, we naturally went for the latter option - we opted for the hardship.

After learning that having insurance is no insurance against not having insurance, we missed the bus at 8am despite getting up at seven. Never mind, the next bus to Santa María from Cusco (S/.20) was at 10am, or so we thought. It left at 10.35 by when even the locals were getting impatient, banging on the windows and demanding our departure. We were already well behind schedule.

The bus took us up and up, and then up some more, leaving the ramshackle poverty-stricken suburbs behind to take us past the pointiest mountains I've seen, crazy jagged like crocodiles' teeth. Soon we were on the windiest road on Earth, driving through the clouds, hairpin bend after hairpin bend, nothing to be seen off the sheer edges but a thick bank of cloud. It was crazy stuff as we made our way back down, the driver driving like a suicide bomber, throwing the bus into corner after corner. Meanwhile a baby, who'd apparently just had a particularly painful operation, screamed and cried to provide the soundtrack as we wound our way down.
We drive through rivers, past landslides, over rocks. Eventually we make it down to the jungle, where the road gives way to an Irish-style potholed bódhreen, 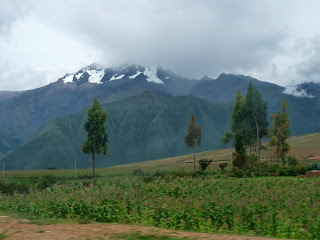 but the driver drives on as before regardless, and the baby cries on as before.
Three or four hours after the driver aimed for every pothole in Perú, Jenny turned around to me and said: "It's probably not worth it." "Probably not," I agreed, before we hit the next bone-jolter.
Four hours of pothole pain later, we finally reached Santa María, just a little under two hours after they said we would.
"I've enough of South America," Jenny declared as she plonked herself down on a bench, exhausted. And that was just the first part.

After arguing with a multitude of combi and taxi drivers over prices, we found one willing to take us directly to the hydroelectrico for S/.10 each. Grand, we thought, and hopped in. Halfway to Santa Theresa, the village before it, he stopped the van and demanded everyone cough up their fare.
"You still going to the hydroelectrico for S/.10?" I asked him. He pulled a face, hummed and hawed and said he didn't have enough passengers, that he'd see when he got to Santa Theresa.
"Not what you told us earlier," I replied and I refused to pay. "We'll pay when we get there."
The lying fucker kicked up a fuss but eventually drove on again, not before asking if we wanted to walk. 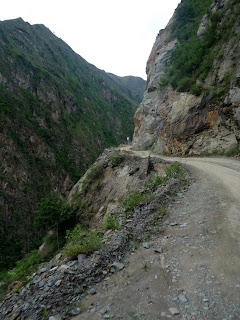 The road itself was even more spectacular and hair-raising than the one before. If we'd cycled down the "World's Most Dangerous Road" the week before, then this is certainly the most exciting. As the track snaked its way up above the river valley below, hugging the twisting mountain-sides, the road edges dropped away to nothingness by our side. Sheer cliffs dropped more than 1,000 metres to the valley floor, with not even a hint of an incline to break our fall should a wheel slip over the unprotected edge. We drove past more landfalls and rock-slides, over rickety old wooden bridges and through gushing torrents tumbling across the track. The views were stupendous, and the gaping abyss yearned to take our little van as we bounced along the road above. There were a couple of hairy moments when we met traffic coming the opposite way, and we had to either stop altogether, reverse to a wider part, or try squeeze past without a wheel slipping over the yawning edge. Bhí mo chraoí i mo bhéal but we all squeezed through in the end.
Of course, when we finally reached Santa Theresa, the driver wouldn't take us any further. He tried charge us S/.8 each and was mightily put out when I'd only give him S/.10 for both. 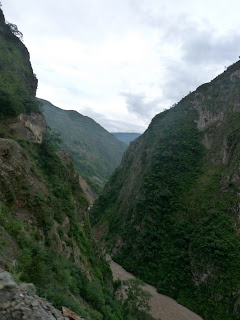 We had to get another taxi to the hydroelectrico, for which we forked out S/.20. Light was failing at this stage and we were slightly worried as our driver sped along beside the river again. Nerves weren't helped when he winked conspiratorially at a colleague as he passed. Soon we're in the middle of nowhere, jungle on one side, river on the other, and suddenly he stops the car.
"Voy a urinar," he declared as he got out for a pee.
We watched closely as he stood behind the car to make sure he wasn't ringing his friends. His hands (both of them!) never left his pee-er though, so it was alright.
"Gracias," he said with relief as he hopped back in. He must have been bursting.
We eventually made it to the hydroelectrico, by which time it was pitch dark. We could see nothing but could hear the river whooshing in its ferocity below. The driver gave us a load of instructions we didn't understand, we thanked him, and he drove off, leaving us alone in the dark. 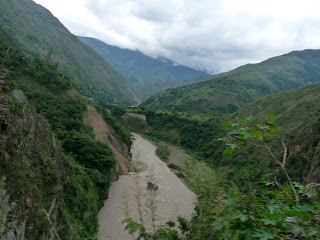 We immediately set off the wrong way through the jungle. We were to walk along the railway tracks to Aguas Calientes, our stop for the night before Machu Picchu itself the next day. But we couldn't find the damn tracks and had no idea where to go. We eventually found them higher above the hydro-electric plant and so knew where we had to go.
We were worried about meeting thieves and other unsavoury characters here in the middle of the jungle miles and miles from civilisation so we discussed the strategy in case we heard any strange noises. We were armed with a flashlamp and a fruit knife. I think I freaked poor Jenny out even more. Nerves were tense. We couldn't heard anything however, save frogs, crickets and all the mad noises of the jungle.
Suddenly we saw a light up ahead. Shit! What do we do?
"They'll have seen us now. We may as well go on," I said. So much for the strategy.
Thankfully it was just a few other tourists making the return trip from Aguas Calientes. "Be careful, muy peligroso," they warned us, before setting off the way we had come. 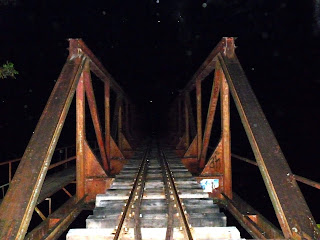 Soon we found out why. A wooden bridge with metal supports crossed the raging river below, and man was it raging! The noise was deafening. We could just imagine the frightful force of the torrent below as we gaped into the darkness. We found a platform to the right of the bridge which we crossed with trepidation, clutching the railing tightly to make sure of no deadly slips.
It was a relief to feel the wooden sleepers under our feet again as we continued in the dark, our flashlamp providing the ray of hope dancing on the beams ahead of us.
A stern blast breaks the monotony of jungle noises and stops us still in our tracks. What the hell was that? We hear it again. An immense horn blasting its way through the night, silencing the frogs and crickets for miles around. A train! Shit! We'd been told there were no trains on the line at this hour of the night. We jump into the bushes at the side of the tracks and wait for it to pass. Soon we see its headlight seeking its way through the darkness, lighting up the jungle as it comes around the corner. BAAAARRRRMM!!! It blasts again. We freeze like frightened rabbits in its headlamp, dazzled by its inescapable beam as it comes straight towards us.
The engine rolls past slowly, sending vibrations through the earth, growling with authority, before rolling off away from us again.
Nerves shot, we continued on as before, probing the darkness with our suddenly insignificant flashlamp, and now on the lookout for trains as well as the robbers and other unsavoury characters.
Half an hour later we heard it again. BAAAARRRRMM!!! Jaysus, what's going on? We darted into the side again, and waited for it to pass. Again it rolls past slowly, as if looking for something, its headlight probing and seeking through the darkness.
"Maybe the driver lost his hat earlier and he's come back to look for it," I tell Jenny.
We keep going, step by step, plank by plank; the monotony of progress self-defeating as we just want to stop and sleep. We'd been on the go over 12 hours at this stage and we'd had more than enough. Bridges over raging torrents break the monotony but after a while even these become monotonous. Christ, are we there yet?! 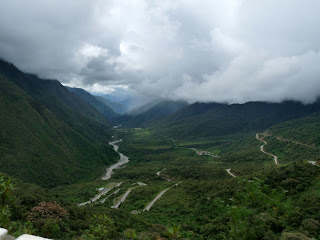 We come to a long tunnel and pray no trains come as we scurry hurriedly through. It's the train or us, there ain't room for all of us in this tunnel, and I've a feeling the train would win if it came to a matter of push and shove.
The next tunnel is even longer, as if seeking to crank up the excitement a notch or two. We emerged relieved and wrecked, and keep taking the wooden beams in our steps.
Eventually, three hours later after setting off from the hydroelectrico, and 12 hours after taking the bus, we come to Aguas Calientes. We'd made it!
Any hostel will do, and I'm asleep before I can even think of getting up again in less than four hours for the next ordeal.