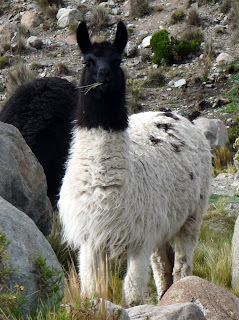 So it's bye bye Bolivia. An eventful place, it's certainly hard to be bored here. For the last five days, since we got back to La Paz, we've been going out as if every day was Paddy's Day. Pubs to nightclubs back to pubs. La Paz really is a party town, probably because there's not that much else to do here. No other tourists I'd met had seen any sights or done anything touristy. The Death Road seemed to be the only attraction.

Poor Jenny got a bad dose of food poisoning and we had to call a doctor. A skinny old fella in a brown pinstripe suit and matching hat, he couldn't be more old school if he tried. He arrived with his little bag of tools and promptly had the situation under control. I had to go to the chemist to buy a whole heap of shit and he hooked her up to a drip attached to a picture-hanger on the wall. A couple of injections and a bottle of manky medicine, enough sleep for a sloth, and now she's right as rain again. Unfortunately now it's Cato, who's coming with us to Cusco, who isn't a well puppy. If it ain't one thing it's something else.

But back to Bolivia. The country itself is very easy to get into. Coming from Perú, we strolled over to find no queues, no people, no waiting at all. The guard barely looked at our passports as he stamped them. Once they don't try bribe you (apparently quite common), it seems they don't give a rat's ass who you are or what you try bring into the country. 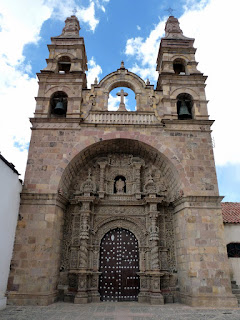 I found the people to be much friendlier and warmer than the Peruvians, the ones who weren't trying to rip us off or screw us over that is. Oasis Odyssey Tours come to mind while there were also problems with the military police who can only be described as arseholes. Walking home from the pub one night, one goon with a machine gun blocked our path in front of the town hall and told us to go through the park on the other side of the road. I asked him why, what did he expect me to do, but he only hid behind his gun and barked his order again. More machine gun-wielding yobs on the other side of the road blocked us from walking there and we had to go through the park behind.
Jenny was mad at me for questioning the fuckers but otherwise they'll get away with murder (although that wouldn't be anything new here). The next night I had to go through the same shit again. Little men with big guns.

Anyone with the slightest authority seems to think they rule the Earth here. Even the traffic police strut around the chaos around them under the impression they're controlling it. Like in Perú they also have whistles, and they incessantly seek attention with them. Evidently unloved as children. Not one iota of difference to the traffic do they make. Little men with big whistles. 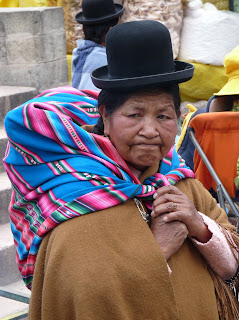 The regular Joes are different however. The women at the market usually have a warm smile and are always in the mood for a chat. They're fascinated by Jenny's hair and constantly ask her if it's real or not, if she can wash it etc. All the traders are amazed when they hear where we're from. We were shopping for dinner when a couple of women just gave us herbs and chilies to add to our spaghetti when they heard what we were making. "Para mejor sabor," they told us.

Another guy was sitting in front of a line of kids' shoes he was selling on the pavement, head down, looking pretty glum - evidently business was bad. Cato plonked his giant foot beside the shoes to size them up. "Awwww!" he exclaimed as he voiced his disappointment. Your man looked up, a giant smile on his face, absolutely delighted. It must have been a while since he heard a good joke.

Likewise, our hosts at Hostal Austria were fond of a joke too. The two men were ridiculously nice, looked after us very well, and asked us to come back again next year "con mucho amigos".

Many of them have a miserable existence however. On the night bus to Potosí we passed through a ghost town in the middle of nowhere at 3am. Nothing moved, nothing stirred, 'twas almost the night before Christmas.
There were only women waiting outside shabby diners in the hope of selling fried eggs or grilled meat to hungry passengers who may be passing in the middle of the night.
One old guy sat on a chair inside his eatery with his wife nearby, just waiting, arms folded, heads down. The place was empty and they looked so bored, so miserable. They should have been asleep, but instead they waited, waited for customers who never came. 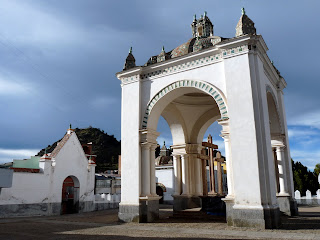 Nobody even buys newspapers in Bolivia. Newsstands are surrounded by hordes of avid readers, all browsing the headlines of papers displayed for sale. How the newsagents make any money here at all is beyond me. I guess newshounds don't make any money here either, just like in Berlín.
But that's a problem for another day. Before worrying about the finances at home, there's a final fling to be flung! So it's back to Perú, where the ancient Inca city of Cusco awaits, and with it the much vaunted Machu Picchu. I'm prepared for disappointment due to a natural suspicion of all "must see" tourist attractions, but am hoping to be pleasantly surprised.
Labels: Bolivia Cusco Death Road La Paz Machu Picchu Perú police Potosí