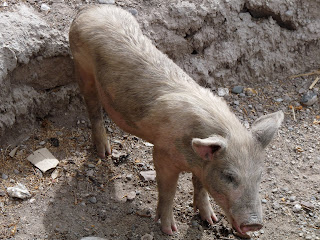 The parents were invited to the Escuela Flora Tristán for a meeting to discuss all manner of shite this afternoon. What they discussed isn't important; what I'm more concerned with is the smell. Jesús, the stench was incredible!
I actually gagged when I walked in the room; the stink of sweat, musty old people and filth was simply overwhelming. I don't know how they stand it themselves.
The floor was crawling with babies, while on the seats squatted short frumpy women in woolly cardigans, skirts and thick socks up to their knees. Hair tied back in ridiculously long skinny plats behind heads topped off with round hats. Beside them sat wrinkled little men in dark slacks and jumpers. All of them sitting on the kids' chairs which only come about 10cm off the ground, but their short little legs seemed not to mind.
But the smell! Christ! It would have knocked down an elephant. They must never wash. How they can even stand the smell of each other enough to be able to produce the little crawlers under their feet. Incredible. They must have constant heavy colds.
I, meanwhile, have not had a shower since Tuesday. There's no water! Not a drop to be had in the city of Arequipa. It just went without warning this morning and we've no idea when it's coming back.
Thankfully I don't yet smell like the campesinos, but I don't want to take any chances. I can think of no greater curse than to be unable to stand the stink of your own stench.
Labels: Arequipa Perú School volunteering