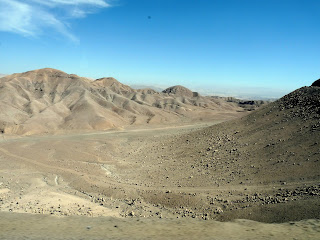 When the old man started talking to me at the back of the combi I knew it was going to be one of those journeys. Thankfully he didn't persist. "Mucho gente" was all I could understand from his toothless mouth as we drove through the market area on our way to the bus station.
He was right. There was mucho gente. Gente all over the place, all milling around, shouting and cajoling for business. Upsidedown featherless chickens hung in the sun, thoughts of a tan far far away from their swinging heads. A woman selling ice cream was shocked I didn't want one for S/.0.50 as we passed. (Everyone does their shopping through bus windows here.) At least she saw the funny side. Meanwhile three calves sat in the dusty street in front of one stall, bored - they'd seen it all before.
The bus to Tacna was at 12, but I managed to buy my ticket after 12 before boarding. Such a thing would never happen in Germany but I guess when there's a seven-hour journey ahead of you, you can afford to wait a half-hour or two.
A Peruvian Del Boy was onboard too, selling DVDs of human anatomy. "¡El cuerpo humana es una maravilla natural!" he announced before showing a clip of childbirth on his portable DVD player. "¡Una maravilla natural!" he shouted above the noise. Walking up and down the aisle, he continued his impressive sales pitch as he handed out sample discs to his captivated captive audience. Unfortunately they were were only captivated until they heard the price. S/.10 for three. Outrageous! They were all promptly handed back and we continued on.
Just when I was remarking to myself what an unremarkable journey it was, (contradicting myself in so doing, for it was remarkable in its unremarkability), after we had passed through desert with stonier and greyer soil than Monaghan, the bus stopped outside Moquegua. Engine off. Everyone grabbed their luggage and disembarked. What the hell's going on? I wondered.
We had to put our luggage through an x-ray machine, I presumed for guns or drugs. After putting my bag through however, I realised they were looking for fruit. Fruit! To keep the fruit fly out of Moquegua, they scan all the baggage coming into town. I guess they're working on the assumption all fruit flies travel by bus. I hate to break it to you lads, but fruit flies can fly!
An apple in my bag escaped undetected. I took extra pleasure in eating it later on.
Five minutes after we got back on the bus, we stopped again. A roadblock! Feckin' Moqueguans protesting over something; not a car, bus or motorbike allowed through in either direction. 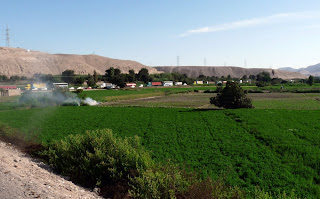 Engine off again, and everyone filed off the bus, again. It was then I ate my apple. I prayed the core was stuffed with fruit fly larvae as I threw it into the bushes.
Two hours passed before we were finally allowed move on again. Then more remarkable unremarkabilty as desert zipped by on either side. Stones, sand, rocks; the sun setting on distant hills; cloud wisps stained pink in the orange desert sky; beautiful.
A couple of hours later, after we had sat through the last of three films each more gory and violent than the one before, I finally saw the twinkling of little orange lights far below us in the distance. We'd finally reached Tacna!
Now for the bus to Chile. It started with a hullabaloo in the station. I couldn't buy a ticket without filling in forms, couldn't board without buying a tarjeta de embarque (tax), still couldn't buy a ticket, running back and forth like an increasingly pissed off headless chicken. Eventually I boarded without buying a ticket at all.
The bus was crammed with bags of toilet paper. Evidently it's much cheaper on the Peruvian side and all the passengers had been stocking up with giant packs of 24 rolls each. Chilean arses are choosier it seems, and the Peruvians didn't want the added expense of luxury brands.
We all got off at Peruvian border control, everyone bringing their toilet rolls for fear they'd be stolen on the bus, and a soulless official stamped each passport or form with out even looking up. Bang! Bang bang!
Back on the bus for the short drive to the Chilean side. Again, everyone lined up with their rolls of precious papel hygenico under their arms.
After I get my passport stamped, I'm asked to accompany an official who brings me to another building. Questions, questions, questions. Where are you coming from? What were you doing there? Why did you pick Peru? How long you staying in Arica? How much money did you bring? He fills in a form as he fires questions at me.
A goon in a jump suit is brought in and he asks much the same questions, and whether I'm carrying any drogas, before telling me he wants to look in my bag. Work away, I tell him. .
Well Jaysus, he goes through everything! He even pulls out my diary and leafs through the pages, (I didn't like that), before asking if I write in it every day. "Solo lo que es interesante," I tell him, making a mental note that I'll be writing this shit in it. "Soy periodista."
He even goes through my guide book, stopping at a hand-drawn map of Arica given to me the night before. Who gave you that? A Chilean or a Peruvian? "Un alemán," I reply. He wasn't expecting that.
Then I've to take off my shoes. He goes through the left one, but declines the other. They didn't smell but I guess he'd had too many bad experiences to take any chances. He felt through the stitching in the rucksack's handles before eventually admitting defeat; no drugs to be found.
"Hasta luego," they say as I head out the door. Hopefully not, I think to myself. Just one more x-ray machine to put my bag through, and then finally, I make it! I'm in Chile! The rest of the bus journey truly was unremarkable.