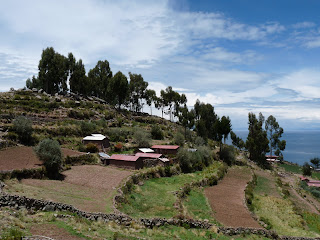 A storm is raging outside as I write - thunder, lightning, cascading rain - the whole shebang. We've made it to Potosí, highest city in the world, once the biggest, the scene of insatiable greed, countless deaths, despair and tragedy - all because of man's lust for a shiny metal called silver. I plan on visiting the infamous Cerro Rico mines tomorrow, so will have more for you on that in due course.
Jenny's home in the hostel, sick in bed, so I'm taking the opportunity to write of Taquile, altogether a happier place on Lago Titicaca, where we were just before we fled south to Bolivia in time for Christmas. 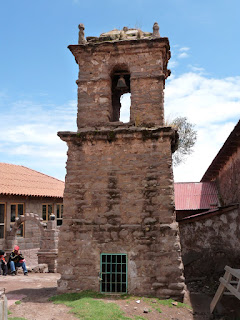 There was great excitement on the boat over. Women and girls in big colourful skirts and white blouses sitting on or beside huge bags and boxes of stuff. Chatting and giggling among themselves. Boats from Puno only leave in the morning so this was their only opportunity to bring goods over from the mainland. A vital link to an isolated community.
The men, meanwhile, in their traditional dress of black trousers and white shirts, wide multicoloured belts with furry pouches attached, and floppy long knitted hats, were shit-faced drunk, despite it being 8am. The captain even took a few slugs from a bottle as he was driving. Thankfully he wasn't as drunk as the rest of them (although he had the music at nightclub levels) and he managed to steer the boat towards the island. (Albeit slowly - it took us three and a half hours to travel just 35km.)
The sun didn't oblige either, and it was damn cold; everybody huddled under blankets on the way over. 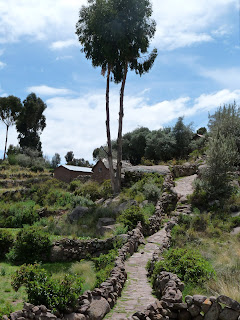 We met an old man knitting on a wall after we climbed the countless steep stone steps up from the port. He offered us accommodation and took us through the "town" to a tiny smelly room with a tin roof above a stone shed with a wooden step-ladder to the door. I think the family lived in the shed below.
Each bed had six blankets, two underneath and four above. Just as well too - it was freezing!
There was no electricity so his daughter later came up to give us a candle which she put in a beer bottle in the window. There's feck all electricity at all on the island, so we also had to invest in a flashlamp which we promptly lost the next day.
The old man showed us the hats he was knitting but they weren't as nice as those on show on the boat so we paid him the €5 for the room and went out to explore this beautiful island.

Like Inishbofin off the coast of Galway, there were sheep everywhere. Baaaaaa was all you could hear from the tiny stone-walled fields which were stepped in terraces up the hill. There are no roads on Taquile, and consequently no cars nor noise therefrom. The silence (apart from the sheep and the odd cow) was bliss. There are also very few, if any, dogs on the island. 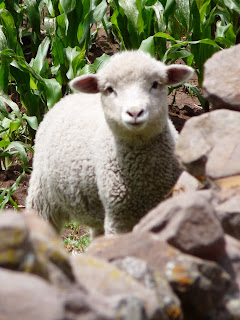 We walked up and up, past women working with picks and spades in their modest patches, past stone cottages and lonely weathered trees, past tiny stone-walled pens for the misbehaving sheep. We walked along an old stone path probably there since before the Incas, before it gave way to the natural stone path there before anyone.
It was breathless work but we eventually reached the top, 4,050 metres high. (Don't worry, we started at 3,815 metres.)
There was an old stone church there without a roof. Jenny was mad impressed, saying it was the perfect place for meditation. She sat down to take in the peace and natural beauty. The view over Titicaca was magnificent, and we could see the mainland and other islands not so far away.
I'm hungry though, and you can't eat scenery, so we move on.

On the way back we found more ruins, and saw a lamb in distress unable to jump up to join its frantic mother (or relative, maybe the lamb was visitin') on the next terrace, before it finally managed to scale the giant two foot embankment. (The mother really was frantic. She pegged it to the nearest shed/house as if to alert humans to the little lamb's plight.)

After a dinner of fresh fish from the lake the rain started pelting down. We sheltered under our tin roof waiting for it to pass.
The family we stayed with asked to know what time we'd like dinner served, and they were so nice we forced ourselves to eat another one. Fresh fish again. Very fresh, it must have been flapping just before they cooked it. Defishious! And we were in from the rain. 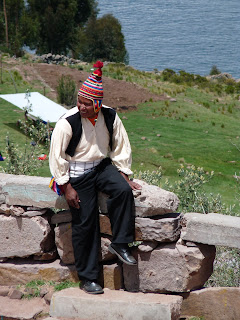 Afterwards they sat down to tell us the history of the place. Quechua is their first language, their Spanish isn't great, and ours no better, so quite a lot was lost in translation unfortunately. A pity. We gathered that 20 families came to Taquile to live after the Spanish routed the Incas. All the natives had moved to the Altiplano (the highlands) to escape the invaders.
Now 4,000 families live on Taquile, all Quechua-speakers with limited Spanish. The family tried teach us a few words of Quechua but they were too complicated to remember even two minutes later. (Nice illustration there of the difference between too, to and two. Maybe I should be a teacher after all.)

I cursed my luck when I had to pay a visit to the outhouse in the middle of the freezing dark night. I thanked it as soon as I stepped outside however. The clouds had disappeared to reveal a sky crammed with trillions if not squillions of pinpoint stars above. Like Wexford on one of those rare clear nights. I gazed up for as long as my bones could withstand the cold before jumping back under the covers. 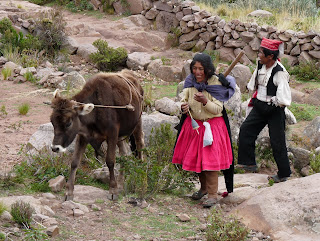 A mouse or a rat kept foraging for something in the roof, but thankfully I was able to sleep again and ignore the cold. Feckin' sheep outside woke me up again in the morning. Baaa, baaa, BAAAA!!!
After breakfast the old man's grandson gave us a presentation of the various items of clothing worn by the natives; who wears what, what married and unmarried men wear etc. He explained that the really colourful hats, the ones with all the colours of the rainbow and more, only luminous, which I'd had my eye on since the boat over, were only worn by men in authority. Such ridiculous hats. I baulked at their price, S/.35 (€9), but regret not getting one now. I haven't seen them anywhere else since. 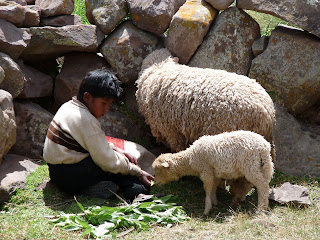 The sun came out after breakfast, and the whole island was bathed in a glorious light, the earthy tones mingling with the rich greens and friendly stone greys as if urging us to stay another day.
There wasn't time however. After more rambling around the "Inishbofin de Titicaca" in the morning, and another fish dinner, we bid adieu to our hospitable family. The father even hugged us both as we were leaving, wishing us the best on our travels with a huge warm smile. Definitely the nicest people we've met so far.
We may just have to go back.