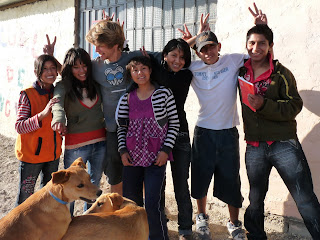 Today was my last day at school. The kids were a bit shocked when I told them the news.
"Hoy? Hoy es tu último día!?"
"Si. Disculpe."
Poor Luz seemed particularly upset, grunting disgruntledly and bowing her head down. "Que malo," was all she'd say. Later I tried tell her we knew this day had to come sometime but it got lost in translation.

Last week I decided to pack it in after feeling my efforts weren't being appreciated enough, especially when there are other things I could, and probably should, be doing with my life right now. Working for nothing and getting no thanks for it, I wondered what the hell I was at. One more week, I decided.
Ironically, in the last week, I've felt my endeavors have been worthwhile and that I have actually been making a difference, but it's too late - the decision was made. So on Sunday I go to Chile.

I'm not sure if the kids have learned as much as I'd like them to have done, but they definitely know more. They're all experts on onomatopoeia now and can handle the backshift in tenses used in reported speech. Maybe one day they'll be unemployed newshounds like me. I hope not. 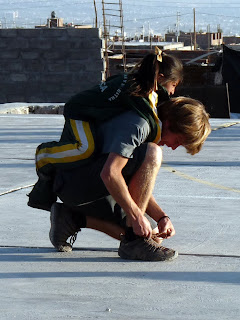 Goodbye was harder than I thought it would be. I spent the evening giving piggy-back rides to the smaller kids around La Cancha while playing football. I wasn't given a choice. I exchanged email addresses with my students when they castigated me for not being on Facebook (who else?!) and I reminded them I'd see them again at the Christmas party on Sunday morning. At 8am! I thought only Germans liked to get up so early. 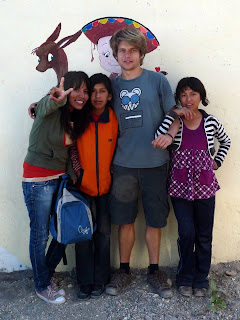 But first Chile. I've made it my quest to get to El Gigante De Atacama, the largest geoglyph in the world. Atacama is the driest place on Earth, where it hasn't rained in some parts for at least 500 years. So it'll make a nice contrast to Ireland.
After Chile I'll be going with Jenny to the most wonderfully-named lake in the world, Titicaca, before we continue on down to Bolivia for Christmas. After six weeks of teachin' nippers, it's time for adventure.

All the pictures from the Flora Tristán school, from our entire time there, can be seen here: http://picasaweb.google.com/faheyc/FloraTristanSchool#

And pictures from Jenny's last day, (she slogged on an extra week,) can be found here: http://picasaweb.google.com/faheyc/JennySLastDay#
Labels: Chile Perú School volunteering