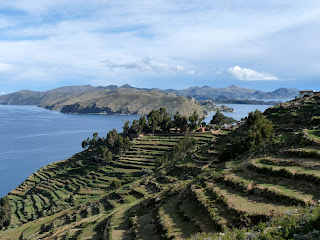 Old stone walls, cosy little farmhouses, gentle green hills - Isla del Sol could be Ireland, but for the sun of course.
Jenny reckons it should be called Donkey Island however, Isla del Burro, due to the sheer numbers of the unfortunate creatures on the island. Never mind all this Inca ráméis about the birth of the sun.
The donkeys are everywhere! All working like donkeys. Again, like Taquile, there are no roads or cars on Isla del Sol so these beasts of burden are being used accordingly by the locals, to haul all their shite from the harbours up the steep hills to the villages.
We could have done with a couple of donkeys ourselves; it's a good 25 minute breathless hike with luggage up to where the hostals are.
Nevertheless, after dumping the bags, we set off again down a stone path to explore the island. The sun bathed everything in light and the birds were chirping as if they knew it was Christmas Eve. The sheep joined in the chorus, baaing without humbugs. 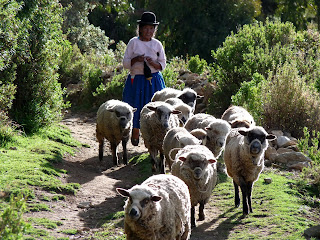 Since we arrived in Bolivia I noticed the local women wear black bowler hats, several sizes too small so they sit are perched on their heads like 1920s Laurel and Hardy wannabees, only with long black pigtails and traditional dresses.
The womenfolk of Isla del Sol are no different, and so attired, they herd their little flocks of sheep along bódhreens between one small stone-walled field and the next.
We stopped after I urged Jenny to give one of her choc-chip cookies to some donkeys in another field. But it seems donkeys have no interest in choc-chip cookies. Luckily, I was able to attract a resting dog's* attention to the unwanted cookie and once he actually found the damn thing, he devoured it with gusto. We were friends then for a short while until he realised he'd get no more. (*All dogs in this part of the world are permanently resting. I've no idea what they get up to to make them so tired.)
Later we passed a couple of llamas grazing in another field. They'd barely look at us. Llamas are incredibly proud and hold their heads high at an angle so they can look down their noses at everything. Such a stupid-looking animal; such misplaced pride. 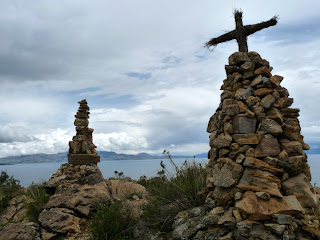 An old man walked by with two pigs ambling along in front of him. The pigs paused briefly and grunted hello before ambling off again. "Buenos dias," we wished the old man. "Chancho!" he replied.
Further on we found another couple of pigs, one of them snuffling around in the muck for something to eat. Sure he had nothing there, so I jumped down and offered him a cookie. He didn't need to be asked twice, but slurped it up in one go. Smack, smack, smack! His kindly little piggy eyes twinkled with delight.
"Happy Christmas Piggie!" I told him. I'm sure no one ever gave him a choc-chip cookie before.
The reason Jenny had choc-chip cookies to begin with is because Germans celebrate Christmas on the 24th, no patience whatsoever. We wandered on and sat on a rock overlooking neat little fields in the valley before the bay below, stone Inca terraces making steps with crops up the side of the hill. The quiet! Just the chattering birds and the odd sheep to be heard. (Some of them were very odd - two of them were chasing each other around and around a house just across the field.)
Jenny was happy when I surprised her with a modest present - she wasn't expecting anything at all. Unfortunately it jumped onto the floor and smashed itself the next day. Some emergency St. Stephen's Day super-glue surgery and all will be okay again. 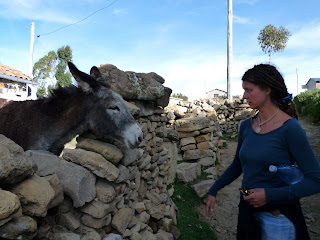 We didn't bother with any of the Inca ruins or any of that. After looking at countless piles of rocks and so-called archaeological sites, I generally find most ruins' best days are behind them.
Christmas Eve dinner was in a modest family-run joint, one of trout from the lake, with chips and rice (as always - they must catch the chips and rice in the nets too) proceeded by asparagus soup which they ran out to buy in the shop while we were waiting for it to be served. It seems Christmas caught them by surprise - there was no tree, no decorations, no Christmas music, nothing. Pan pipes accompanied our meal as they do every meal in Bolivia.
Lamentably we couldn't splash out on a bottle of wine. My credit card parted company from us sometime in the days before and we'd no way of taking money out in Copacabana. Luckily we were able to exchange some dollars but funds were too tight for luxuries. We had to share a breakfast on Christmas Day the next morning, and lunch consisted of a pack of crackers sitting on a different rock. 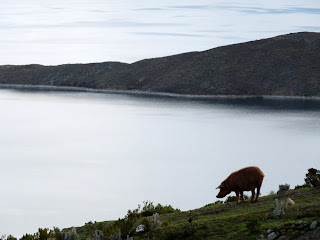 Unfortunately I found the islanders not to be as friendly as their Peruvian cousins on Taquile. The hostel woman barely said goodbye as we were leaving - she'd had our money at that stage, while the man didn't reply at all. Another woman tried charge us B$1 to get change when we tried pay her.
All the prices are inflated for the tourists. They blame the long trek which the donkeys need to make to haul everything up from the harbour. Donkeys' wage demands have sky-rocketed in recent years don't you know.
They really shaft the tourists at every opportunity. The boat out to the island cost B$10 but to get back cost B$20! I asked why it cost double to go back exactly the same way and was given some bullshit excuse about more people travelling to the island than back to the mainland. I guess they all swim back. 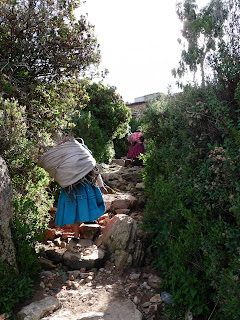 We returned to Copacabana with my sense of seasonal goodwill dented and B$1 between us (10 cent). Thankfully all the shops were open and we were able to exchange some emergency €uros and have a proper Christmas dinner that night. Jaysus, we were starving! We ordered a load of stuff: wine, real soup, salad, beef for me, veggies for Jenny, and a mango shake - not very Christmassy, but yum!
We didn't mind that we blew €10 in one go. I even splashed out €1.80 on a café irlandes later on. What the hell, it was Christmas! It'll just have to be water and mouldy bread from now on.