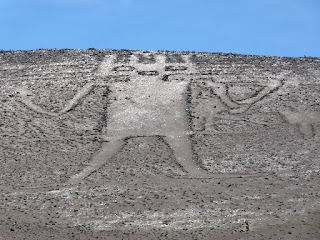 He was still there when I arrived, still standing, waiting patiently just as he had done all those years.
"Howya," was all I could say. I couldn't think of anything else. As soon as I said it I wish I'd thought of something better.
He looked surprised to see me, eyes wide and mouth open as if in shock.
"Are you surprised to see me?" I asked.
"Eh... no," he replied. "Hrummph!! It's just no one ever spoke to me before."
"Not even to say hello?"
"Nope, hrummph!" (For he hrummphs a lot). "They come along in groups with cameras hanging from their necks, ooh and aah, take photos and then piss off back to wherever they came from without a word."
"How rude!" I concurred.
I waited for him to calm down before asking: "How do you know what a camera is?"
"What?"
"How do you know what a camera is? You're 1,000 years old or so, no one has ever spoken to you, and yet you know what a camera is."
"Well... actually, hrummph! You're not the first person to have spoken to me. There was a girl from Japan, very pretty she was too. She asked if she could take a picture, and showed me a picture-making machine which she called a camera."
El Gigante sighed. "Now all the feckin' tourists have them. They just click away without a thought for my feelings. At least that Japanese girl had the manners to ask."
"Yeah, the Japanese are very polite alright," I agreed. "What happened to the girl?"
"She took her pictures and we chatted a bit but it was difficult. Her Spanish wasn't great - terrible pronunciation, hrummph - and my Japanese isn't what it should be."
"Your English is very good."
"Ah, you're just plámásing me now." 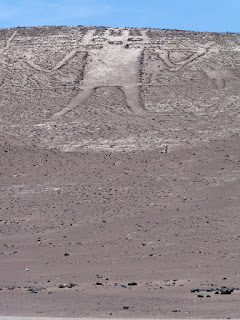 I was amazed. "Plámás! Where did you hear that?! It sure as hell wasn't from the Japanese girl!"
He chuckled to himself. "I knew you'd like that! I get to meet a lot of the old heroes of legend in the other world, including the Irish ones, Cúchulainn and Fionn Mac Cumhaill and all those lads and they're always saying that. It's their way of getting more compliments. They can never get enough, hrummph, especially from the girls."
"Wow! So they're still knocking around. I'd wondered where they ended up."
"Yep, the other world. Sure where else would they be?"
"And how come you're free to go in and out?"
El Gigante chuckled again. "Well my young whippersnapper [compared to him], I'm a living legend amen't I? Hrummph! Neither dead nor alive, and we get special dispensation to do whatever the hell we want."
"Wow."
"Ah, it's not all that great. The more time passes, the more I realise things just never change, neither here nor in the other worlds."
"Worlds?! You mean there's more than one?"
"Of course. You don't think they'd put everyone in the same world would you? Hrummph! That would be frightful! All squabbling and fighting over the most tedious things. No no, that wouldn't be good at all. In fact, if I had my way everyone would be given their own world, left in peace without having anything to do with anyone else."
He sighed again. "Now that would be heaven."
"Sort of like what you have going on here then," I suggested. "You're on your own in the middle of nowhere and apart from the odd minibus of tourists and the odd nutbag who decides to walk across the desert, you don't meet anyone at all!"
He remained quiet. "Hmmm," he said eventually. "Maybe you have a point. Maybe it isn't so bad after all!"
With that, I noticed I still hadn't taken any pictures. "D'you mind if I use my camera Gigante?" I asked, not daring to offend him by simply whipping it out.
"Not at all! By all means my friend. Work away man! Work away."
Cautiously, I snapped a few shots which I'm pleased to display here for your viewing pleasure. 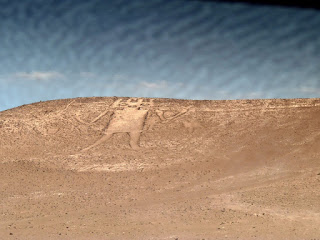 While he had given out about the tourists before, I could see El Gigante was actually quite happy to have his photo taken, secretly delighted to be the centre of attention. He posed in the same manner in which I found him, and I'm delighted to be able to share these with you now.
I left him in a much sunnier disposition to which he'd been in before, if that's possible in a place it never actually rains. I left in a much sunnier disposition too; after all the time and effort to get here, I was thrilled to have finally seen El Gigante de Atacama!

More pictures of El Gigante can be seen here (with his permission of course): http://picasaweb.google.com/faheyc/ElGigante#
Labels: art Chile El Gigante de Atacama Lines in the sand