The driest place on Earth 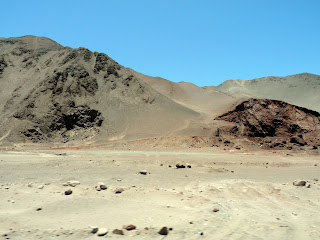 Chile's Atacama desert is the driest place on Earth. In some places it hasn't rained since humans began taking note, over 500 years ago. For all we know it may never have rained there at all!
The Andes stop clouds coming over from the Amazon basin in the east, while a high pressure point over the Pacific keeps moisture out from the west, as do more mountains and the cold Humboldt current flowing northwards from the Antarctic - it chills the desert air preventing the build up of moisture in the sky.
Some parts do get limited moisture from a thick fog which rolls up from the deep Pacific, and this allows some hardy plants survive in places. Some fog herders have managed to harness this phenomenon using fine mesh nets to get water. They're the lucky ones however. In the heart of this desert, there isn't even that. Nothing lives here for nothing grows. Not a cactus, not moss, not bacteria, nothing. The air is so dry, nothing rots (metal needs moisture to oxidise) and meat can be left outside for a long time without going off. 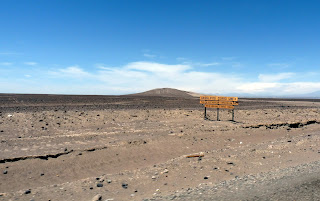 So you can see why I was a bit anxious about trekking the 30km hin und zurück to see El Gigante de Atacama. I had gone to the restaurant Ruta del Gigante in Huara, the nearest civilisation, to suss out the possibility of a lift. Your wan's eyes opened wide when she heard where I wanted to go. She looked at me like I was crazy. Not a chance. There was nothing, not a taxi, not a spare donkey, nothing.
"¿Bicicleta?" she suggested.
I seized on it and asked her if there were any to rent.
"No," she replied, dashing all hope as soon as it arrived. Another guy, who'd overheard everything, said I'd be better off going back the 73km to Iquique to do a tour from there.
Damn it, I'll walk so. I bought a big bottle of water and set off in good spirits. It was hot, but it wasn't unbearably hot. Ten minutes down the road I heard a car beeping behind me. When it stopped I saw it was your man from the restaurant. That's when I was introduced to Rodrigo y Ricardo, gay lovers who took pity on a gringo so determined to see El Gigante he'd walk through the driest place on Earth to get there.
"We couldn't let you walk. 'That poor guy,' we said, so we're gonna take you there," Rodrigo said. "Get in." So I did.
Rodrigo was a former tour guide, and he explained that El Gigante is the largest human-form geoglyph in the world at 86 metres, about 1,000 years old, and probably drawn by the Aymará people in reverence of the sun, or Pachamama (Mother Earth). They built it by scraping the sand away and filling it with a paste of sand, clay and piss. This formed a rock-hard cement which is constantly cleaned by the wind, leaving the image clear at all times. Cool huh? 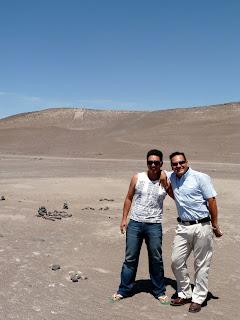 In between telling me all the local history, he stroked his boyfriend's arm, danced to every song on the stereo and sang every word, as we sped through the desert to the tunes of Sophie Ellis Bextor and the Pussycat Dolls.
They brought me to La Tirana and Humberstone (future posts), giving me tips for the best Chilean rums to try, before we finally said goodbye and I thanked them profusely. So I'd been all set for a huge ordeal, but instead it was a gay excursion through the Atacama in Ricardo's 4x4. I was so happy I didn't take a tour.
Labels: art Chile Desert El Gigante de Atacama Lines in the sand