After bidding adieu to Chile after too little time - I'll have to go back - I made my way back to Arequipa in Peru.
The border crossing passed without incident this time - the Peruvians don't give a rat's ass what you bring into the country - and I boarded the next bus to find a little old man with no teeth in my seat. 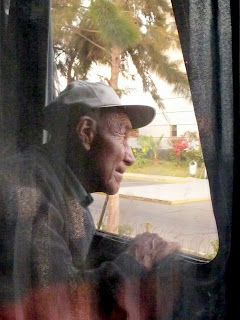 He had his head out the window, observing all the hustle and bustle with great interest, blinking and clucking at all the craziness, a big grin on his wrinkled face. He was so excited I couldn't kick him out and so sat down beside him.
We promptly made friends, as close as the lack of communication would allow. He was only travelling as far as Moquegua and he opened his eyes wide when he heard I was going all the way to Arequipa. That was as much as our lack of communication would allow. He promptly stuck his head back out the window. He might as well have had his tongue hanging out of his mouth as the countryside began to speed by.
Soon after, the bus was stopped by police; everyone ordered off to have their luggage checked. Only half the bus got off so I stayed on too, luggage under my seat going nowhere. Half an hour later the bus took off again. It seems police controls are voluntary in Peru. Somewhat defeats their purpose - I doubt drug or arms-smugglers would voluntarily hand their luggage over to be searched. 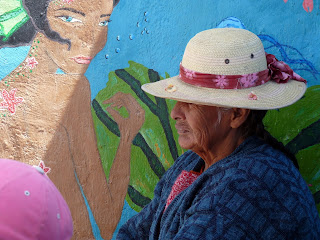 Hours later, after dark, the police boarded with flashlamps and conducted random searches. Again, they left me alone despite seeing my rucksack stuffed suspiciously under the seat. Instead they picked on the unlikeliest smugglers, old women and babies, before eventually letting the bus proceed again.
My new friend beside me meanwhile, told them to feck off, shooing them away with his hand as if he couldn't be bothered putting up with them. No wonder we got on so well. He used to call over the women selling sweets and drinks to the window whenever the bus stopped, ask them how much everything was, and then shoo them away too, before turning back to me again with his huge grin.
There were no controls for the dreaded fruit fly outside Moquegua this time. Not only must they presume all fruit flies travel by bus, but that they travel between 9am and 5pm too!
I wished the old man all the best as he disembarked. "Que te vaya bien." He shook my hand, nodded, grinned and gave me some advice I couldn't understand. I'm sure it was good whatever it was.
Later once again, the police got on for more searches, much to the annoyance of my fellow passengers, and once again they ignored the likeliest suspects. It was damn late when we pulled into Terminal Terrestre in Arequipa. 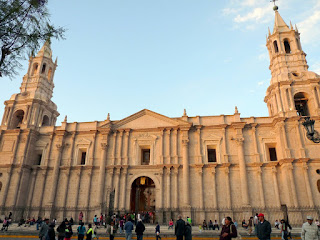 Our last night coincided with Greig's birthday, one of the volunteers, so we all went out for a meal. It was a disaster. I'd be doing the staff a favour if I called them incompetent or stupid.
They could only take one order at a time, each time the waiter forgetting his notebook. Just two tables were occupied at the time and the place crawling with staff. The chips were raw, and came back rawer if anything after I asked to have them cooked.
Instead of clearing the dishes, one waitress picked up a little dish for peanuts, asked if a half-full bottle of coke was finished, ignored the empty one beside it, and went back to the kitchen with just the peanut dish.
Everyone got their meals at different times. In the end poor Charlotte didn't get any at all. For over three hours she waited, waiting for her meal, watching everyone else eat. Three times they brought out her pizza with meat on it, despite her telling them repeatedly she was a vegetarian. 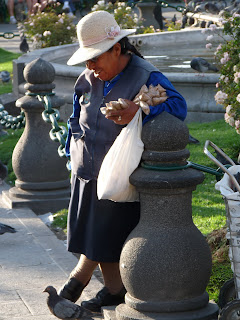 It ended with a huge row when the boss refused to come out to talk to us, and when the only discount offered was for the vegetarian pizza with meat on it which wasn't eaten. I had to tell them nobody would pay at all before they eventually offered a token reduction.
We consoled ourselves afterwards with jelly shots before finding ourselves in two nightclubs. It was very late and drunk getting to bed. All in all, a fitting end to our stay in Arequipa.

All the Arequipa pictures can be found here: http://picasaweb.google.com/faheyc/Arequipa#