The sheep and the donkey 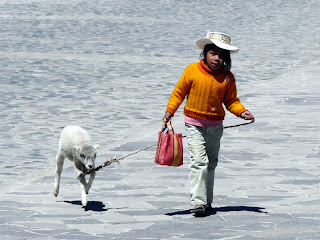 A little girl with her sheep ran like bejaysus for the bus in Yanque, one of the villages en route from Chivay to Cabanaconde. As the bus beeped and honked enough to wake the dead, she ran as fast as her little legs could carry her, while the small sheep hopped and skipped along beside her.
They made it, but it was at this stage that the sheep decided he/she didn’t want to board the bus. With a bleat of protest, it decided to make a break for freedom around the front of the bus. It was promptly hauled back; a woman grabbed it by the hind leg and neck before somewhat ungently coaxing it onboard. The poor sheep could only look out the windows at the countryside soon whizzing by. “Baaaa!!!” Not a happy sheep. Not even the beauty as we delved deeper into Cañón del Colca could help it forget its failed escape attempt.

Never mind sheep, this is Donkey Country. Everywhere you look they can be seen; everywhere you listen they can be heard. Hee haw! Hee haw! Standing alone in dry ungiving stone-walled fields, or hauling heavy loads along dusty roads for their demanding masters. Either way they looked miserable. 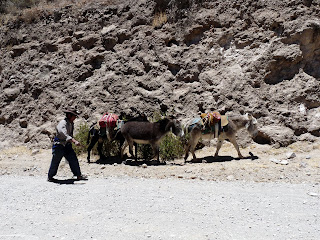 Donkeys always look miserable however, even without our bus smothering them in great clouds of dust as it zoomed by. You very rarely see a happy donkey.
Bucking the trend (hee haw!), was a particularly gleeful baby donkey, a foal to those au fait in the world of donkeys, who ran and skipped and jumped over a pile of rubble in a stone-walled garden, before stopping and running and skipping over it again, and again, and again. Hee hee haw! Where he got the energy from is beyond me.
One day he’ll be told he isn’t actually a horse destined for stardom on the show-jumping circuit, but a donkey destined for a life of burden. Then he’ll be miserable. Just like the rest of them.
Labels: Cañón del Colca Donkeys Perú Sheep