Arequipa’s cool. Just as well, as it’s going to be home for a while. We were invited to a party on our first night (last Thursday) after popping into the German language centre to ask about Spanish courses. (I don’t know what language I’m speaking half the time.) The locals were delighted to have "natives" to practice their German on, while we were happy just to drink the free pisco. (Grape brandy. It’s yum!) Jenny made a load of new friends, exchanging my mobile number with complete strangers. I’ve been getting weird messages from "Fernando" in the middle of the night since. 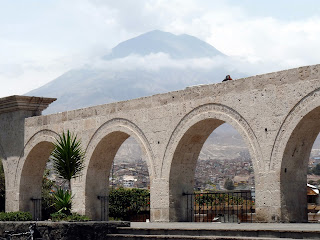 Over the weekend we moved into what will be our new home for the next couple of months. In the fashionable district of Yanahuara, we are sharing with a ridiculously-friendly woman named Aglae (who I’ve been doing my best not to call Algae) and her 12ish-year-old daughter Feorela. There’s a son too, but I’m not actually sure if he lives here too.
The apartment’s very nice with electricity 24 hours a day, running water, warm showers, carpets on the floor, paint on the walls. Sheer luxury! It’s just around the corner from the main thoroughfare, and from our room we have a wonderful view of El Misti, the volcano which rises majestically behind. It’s been yonks since the last eruption apparently, although the next “big bang” is expected, sometime. As long as we’re far far away I don’t mind.

A doorman opens the gate for us when we’re coming and leaving, and I suppose he keeps the peasants out too. It’s quite an affluent neighbourhood, so for €50 each for the month, we’re doing alright. I haven’t noticed any rats or cockroaches yet either – I’m sure it’s much too expensive for them. 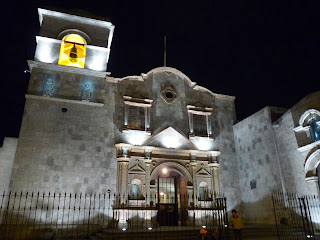 Our new flatmates are very nice despite being huge Michael Jackson fans. Aglae always wears a wide smile and we can treat her home as our own. Yesterday was her birthday, so we were invited to stuff our faces with cake while sitting with her brother, sister and elderly mother.
They all laugh like maniacs at the slightest thing. Whether it’s funny or not is immaterial. At times yesterday I thought they were going to choke, they were laughing so hard. Hector, the brother, was slapping his thighs at his own jokes, while the women were waving their hands in front of the faces in an effort to control the spasms of laughter, tears rolling down their cheeks. They were rolling around the floor when Jenny was asked if she liked Pisco Sour cocktails and she replied “who doesn’t?” I wouldn’t mind, but they were only drinking coffee.

We started work yesterday too. The school’s in a run-down recently-settled area where the locals eke out a living by mining stone from the mountain behind. There's no running water so the toilet is against the outside wall, or wherever you can find a secluded spot.
I must say it's great to be able to work in abject poverty before returning to our 24-hour security condominium complex. The contrast is a guilty pleasure.

The kids are ridiculously enthusiastic. Some were waiting outside the school for an hour before lessons even started. It was only when the lesson started that they lost their enthusiasm. 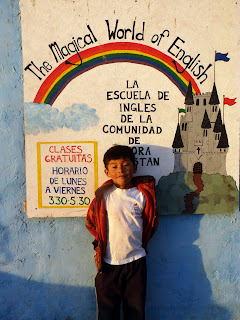 Afterwards we played a chaotic game of fútbol while another took place on the same pitch, with volleyball, skipping and ball-chasing dogs thrown in too for added confusion. Still, it was a good laugh, even if I found my teammates to be skipping or climbing poles when they should have been surging towards goal.
The little girls already have little old woman faces. One girl in particular, who is allegedly two, could pass for an 80-year-old if she wasn’t just two-and-half feet tall.

The school itself is about 40 minutes away in a minibus which was crammed like a tuna-tin yesterday. I had to stand with my neck arched because of the low ceiling, while a fellow passenger placed their elbow in my mouth. Low ceilings don’t bother Peruvians, they being a much littler folk than us Europeans. Apparently all the buses are crammed like tuna-tins, so there’s no point waiting for the next one. Sure enough the return bus was packed to the edges as well. 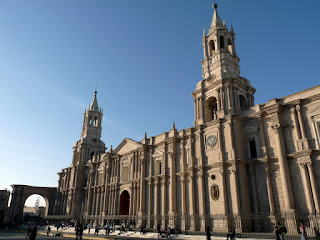 I didn’t go to school today though. Real Madrid were playing and Manuel Pellegrini’s future is more important to me than the childrens’. (Just for today).
Normally I avoid Irish pubs like swine flu, for fear of meeting someone I know, or worse, someone who knows me, but today I parked myself up in front of the TV in Fallon’s and ordered a beer. The first beer I’ve drunk since September 21st! It’s true. Over a month without a beer. That’s never happened before.

I guess that’s why we’re here. To do things we’ve never done before, experience unexperienced experiences. Everyday something new, something mad, something to write about.
Labels: Arequipa Life Perú School volunteering work