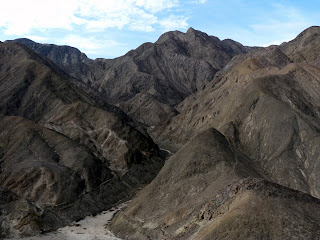 The bus to Arequipa was a nightmare. Four hours late on account of a "broken engine", we eventually left at 2 a.m. We had been told it would be a bus cama with fully reclining seats so one could sleep through the night. Lies, damn lies. The bus was jammed with people when it eventually showed up, and not one of the seats looked anymore like reclining than a hot air balloon does. The smell of piss, sweat and dirt was incredible. A suspicious-looking pool of liquid emerged from under the door of the toilet.
Two peasants were shooed out of our seats at the back. One of them, an old woman in rags with one tooth in her head, seemed nevertheless grateful and insisted on shaking our hands with her filthy claw. She babbled some incomprehensible ráméish. Her colleague, younger and even less appealing, promptly took the seat next to us and laughed at her hapless colleague as she was ushered down to the lower deck (where, ironically, the more luxurious seats were located).
We tried sleep nonetheless as the bus lurched from side the side as the Panamericana twisted and snaked its way through the mountains. A few hours later the less-appealing peasant puked. Her body bent over as she lurched and heaved into a plastic bag. She then considerately hung her produce on the arm of her seat.
"Great,"·muttered Jenny who was sitting right beside it. "Now we can smell it for the rest of the trip." Wafts of puke came towards us in waves. An hour was enough. The bag was unceremoniously flung out the window. 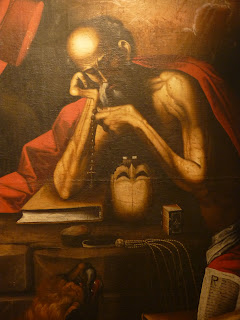 Dawn greeted us across the desert sands an hour or so later. And still the bus rumbled on. At 8 a.m. we were woken by the sounds of gunfire. A film, with the volume at unbelievable, blasted out from the TVs. A more violent film has not been made. Bad guys slaughtered in hails of bullets, slashed open with machetes, necks snapped in the name of entertainment. All to the soundtrack of heavy metal. Loud steamy sex made a diversion from the blood-thirsty violence. The old peasants were amazed, eyes wide open as they took in all the crazy goings on.
Thankfully the rest of the journey passed without incident. I was able to stick my head out the window to escape the stench and nine and a half hours after departure, we finally arrived in Arequipa. We took a taxi to our hostal, the appropriately-named Home Sweet Home. We'd made it!
Labels: Arequipa Bad service bus Perú