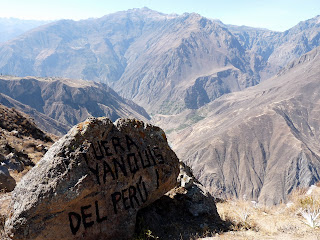 Gringos and tourists are there to be taken advantage of in Perú. No matter where you go, what you see, some fucker will try rip you off.
An official with more self-importance than a peacock boarded the bus to Colca Canyon and tried sell us a Boleto Turistico to visit Cruz del Condor. S/.35 he wanted from us each, about €20, for us to visit this natural attraction. To put it in context, the three-hour bus ride to get there was S/.3.
We told him no, we weren't going to Cruz del Condor, that we were going direct to Cabanaconde instead and that we would buy the Boleto Turistico there if we decided to.
Well, what a fuss! He told us all tourists had to buy the tickets, that the tickets weren't just for Cruz del Condor, but the whole canyon, and that we had to buy the tickets if we wanted to progress.
We refused point blank. No. We'll buy it in Cabanaconde if we want it. We don't have the money in any case. Now fuck off. (We didn't actually say that, but he got the message.)
In a huff, he sat down on the seats across from us, while another official-looking colleague targeted other tourists on the bus, to convince them too of their duty to buy a Boleto Turistico. They all half-heartedly protested before coughing up the money. 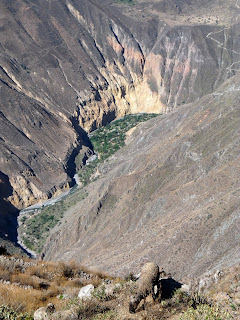 Imagine charging people to visit a canyon! A canyon put there by God, Allah, Buddha, Dustin the Turkey or whoever you believe in. It sure as hell wasn't the Peruvians who put it there. All they did was discover another way to shaft tourists.

As we were getting off the bus, the ticket collector tried charge us a "tourist fare" of S/.5 instead of the S/.3 everyone else paid. Another fuss, another hullabaloo.
"But you're tourists," he pointed out, by way of explanation.
"How do you know?" I replied, just to see what he'd say. I should have told the crook we were actually working, teaching kids English so they might put it to use when they're older. I just hope they don't use it to shaft tourists too. 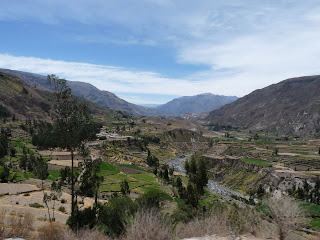 Such short-sightedness is endemic in Perú. The officials are too stupid to see if they rip-off the tourists, they won't return. Of course, they can't benefit by lining their own pockets with the money spent in restaurants, hostales, hotels and shops.
A tourism industry is a fragile one, very susceptible to greed and stupidity. If the Peruvians aren't careful, then theirs will go the same way as the Irish one. Then nobody will have anything; not even the corrupt officials.

The condors eventually obliged at Cruz del Condor after our epic hike, and a few of them came out to fly overhead, swooping down with their wide wings outstretched as if to hug us. Whoooosh!! A pity the camera wouldn't oblige by focusing on them.

More officials hung around too, waiting to pounce on arriving tourists to force them to buy their Boleto Turistico. They didn't come near us however. I guess they knew better.
Labels: Cañón del Colca Condors Perú Rip-off