Fuckbags. Cheating lying fuckbags. I'm struggling to contain my disdain and contempt for an act of dishonesty so contemptible you would immediately assume England was at fault. Not the French. But France it was who cheated Ireland out of the World Cup and confirmed that after all, the big teams do always win, money does rule the world, inevitably is not evitable and the rest of all the bad shit is true too. 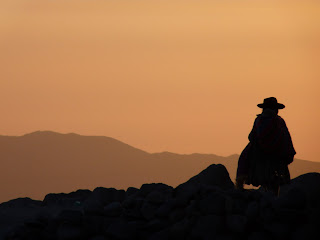 I went to Arequipa's only Irish pub, Farren's, with neither hope nor expectation. After all, it was 1937 since Ireland last won in Paris. I got there to find the pub full of French. That didn't help. Then some Australian fucker sat directly in front of me, blocking my view with his stupid head. "All the good seats are gone," I told three Clare lads who wandered in after me. Never mind. They clambered up on the stools behind.
The match started. Kevin Doyle on for Ireland. With a Wexfordman involved, you can be sure we'll fight. It's all Ireland. France can't get the ball. Meanwhile the French guys beside me are really pissing me off. Not even looking at the match. Chatting and presuming it's a formality before Les Bleus score a few goals and progress.
But it's all Ireland. Duff gets the ball out on the wing. A cross into the box. Robbie Keane. Gol!!! Goooooooooolllll!!! The pub erupts like the volcano Misti behind. Waaaaaaeeeyyyyyy!!! The French know they're in an Irish pub now. That shut them up.
In fairness, it's no more than Ireland deserve, with two clear chances for a goal before. I take back all the bad things I said about Keane being a Dublin knacker. It's half-time. 0-1. The excitement is palpable. I'm actually shaking. The Clare lads tell me of their trip to Colca Canyon at the weekend. "We stayed in a hut. 'Twas great. You wake up in the morning and you're in the middle of a fucking canyon!"
The second half starts. If we score another goal, France have to score two to qualify. But it doesn't look likely. This time it's all France. But still we have chances. Jaysus lads, you need to put those chances away! It's helter skelter, end to end, mad shit. The pub is heaving with excitement. Even the nuns in the monasterio across the road must be wondering what's going on. I ask them to pray for us. Four clear chances for Ireland, but still I get the feeling we're hanging on by our fingertips. Full-time. Ireland win, but the tie's all square thanks to that flukey French goal in Dublin. Extra time looms! Now I'm really shaking. I order my third beer.
Hope is reignited but I try keep it under control. I want to believe but still I can't. Years of disappointment has taught me to err my optimism on the side of pessimism.
I look to the smoke-filled heavens and ask St. Patrick to intervene. Jaysus, do something! I even talk to the French guys beside me. Ask why Benzema isn't playing. "Because Domenech stupide." I hope they're right. But I'm not sure.
Then France scored the goal. By cheating, as I may have mentioned before. A blatant hand-ball. Offside too just to add insult to injury. Irish protests went in vain as the French shamefully celebrated.
The end was as inevitable as it was desperate. Everybody forward, searching for the deserved goal which never came. There was a furious exodus from the pub. Only the two French guys happy. I congratulated them but couldn't look in their eyes, before I too left the scene of the crime. 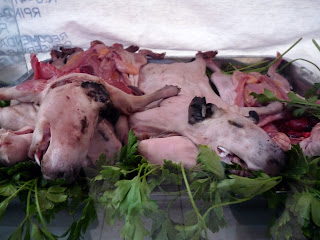 So a France without honour goes to the World Cup, while Ireland with honour goes home. The French will know they got there through deceit, but that won't stop them celebrating. For Ireland meanwhile, it's yet another heroic failure. It couldn't be any other way.
Labels: Arequipa Fußball Ireland