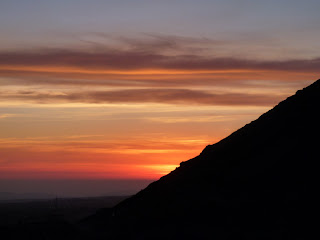 Vandals struck at the heart of the Flora Tristán school last night when they callously broke in to destroy the very heart of its endeavor.
The flagpole, on which a Peruvian flag had been flying proudly, with a crude homemade union jack underneath, was toppled and then desecrated in an apparent act of patriotic fervor.
"They broke in, knocked down our pole, and then burnt the flag," Jim told us when we came in, his sense of shock and dismay apparent.
"Which flag? The Peruvian one?" I asked.
"No no, the other one. The Peruvian flag is okay, but they completely burnt the other one."
I burst out laughing. I couldn't help it. Just ten minutes before, as we were walking to the school, I had been telling Jenny there was a union jack flying underneath the Peruvian flag, that there was no way they could expect a proud Irishman to work in a school with a British flag flying above it.
"I'll have to break in some night and get rid of it," I told her. "There's no way I can work there with that thing over my head."
I needn't have worried. It seems someone else had the same idea. The fact they left the Peruvian flag alone showed they were professionals who knew exactly what they had to do. Not sure Jim would understand though. He looked at me strangely after I broke into laughter. I didn't bother trying to explain.
Labels: Perú pride School