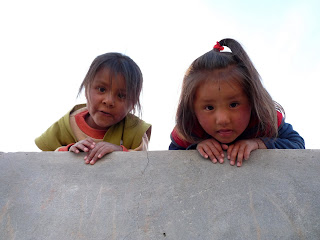 Apart from the lessons, playtime in la cancha is very important for the niños and niñas of the Escuela Flora Tristán. Perhaps even more important. Through some strange anomaly of playground physics, there are always more children on the basketball court after lessons than take part in the classes themselves.
It’s always a chaotic scene. Goals at either end are used for fútbol of course, although there may be two ongoing games at the same time. On one side of the court children queue up for skipping, while on the other side volleyball takes place, although this sometimes becomes basketball, depending on the whim of the players at the time. Little children throw ropes over the bars above the goals, unwittingly becoming goalkeepers as they swing nonchalantly between the posts. 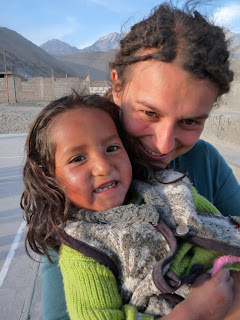 All the while the fútbol games rage on, with children, teachers and the local dogs - who all seem to know exactly when to turn up for playtime - all taking part, running into each other, the skippers, volleyballers, goal-swingers, and anyone else who happens to be in the way. Who plays which way is not important, with all chasing, kicking, barking and yelling at will.
At the sides of the playground can be found other children. These industrious little workers dig and burrow at the dust and rocks, as if mining for precious schoolyard metals just waiting to be found. Some kids can’t go to school at all because they’ve to work in the mines. It’s perhaps ironic then that the ones in school feel they’re missing out.
Labels: Perú School volunteering