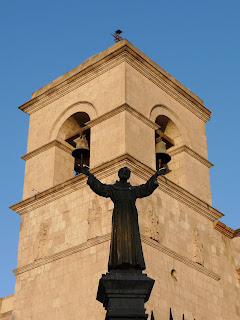 I never mentioned the Kamikaze Käfers. That's kamikaze beetles to non-German speakers who consequently miss out on the joys of alliteration.
These suicidal beetles were actually flying around Nazca's Plaza de Armas as we munched on empanadas and fine cake. Suicidal because they flew directly towards poles and benches before colliding head-on with fatal consequences. They didn't fly anymore after that. Loads of the poor creatures' bodies littered the ground, legs up in the air attesting to their poor navigational skills.
The first one I noticed flying straight into a pole was just being careless I thought, but after witnessing a number of others do exactly the same thing, we can only assume it was deliberate. No suicide notes however, no letters to loved ones, no pleas for forgiveness.
Just another of Nazca's many mysteries.
Labels: bugs Nazca Perú