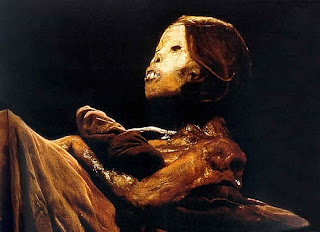 Juanita the "beautiful Ice Princess" is anything but beautiful. She looks like a horse for Christ's sake! In fairness though, she is over 500 years old. Her frozen corpse was found on top of a snow-capped mountain in The Andes in 1995 before she started bringing tourists to the Museo Santury in Arequipa some three years after that.
Poor "Juanita" was sacrificed you see, just one of a couple dozen children who the Incas decided to send to the next world to improve matters on theirs. She was 12 or 13 at the time.
Apparently she knew long before of her impending fate. She had been selected from a wide pool of potential victims because of her outstanding breeding and good looks. Jaysus, I'd hate to see what the rest of them looked like! Anyway, she had been brought up in luxury (all the guinea pigs she could eat) in a fashionable part of Cusco until the fateful day came when she was told the time had come. There are no accounts of her reaction at the time, but I assume it's safe to say it was mixed.
Accompanied by an motley crew of high priests, porters and llamas, she was marched over 150 miles, 250 kilometres, to Nevado Ampato overlooking Cañón del Colca, soon to be her final resting place (or so they thought at the time). 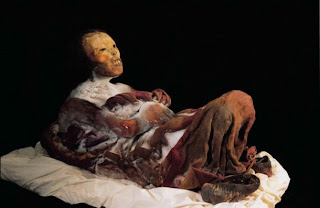 Of course, then they had to climb the damned thing, no mean feat as its ice and snow-crowned summit reaches a lofty height of 6,380 metres. All the way to the top they went.
Just to help her along, to compound the unfortunate girl's misery, they starved her too, forcing her to undertake a fast as well as contend with decreasing oxegen levels as they climbed. Meanwhile, I'm sure the priests were stuffing their faces.
After reaching the summit, just before her death, the priests gave Juanita alcohol and a potent mix of herbs. Irish priests would employ similar tactics years later, with the blessing of the bishops.
So they exhaust her, starve her, get her pissed, and then inflict the fatal cruel blow. This was a sharp blow to the head with a pointy-staff, just above her left forehead, which crushed her skull.
They buried her with a load of Inca stuff, pottery and the like for the next world. I guess she could have sold it to tourists.
There she lay undisturbed for 500 years until the nearby volcano Sabancaya erupted, sending fire and brimstone into the air, melting snow and ice from Ampato, and releasing her from her icy grave. She tumbled down the mountain from her pottery, and in the two weeks she waited before being found by a quick-thinking adventurer, lost her eyes and acquired her horse-features after the sun dried all the moisture from her face. That same expedition also found another girl and a boy, who was just eight, buried in similar graves on the same peak. 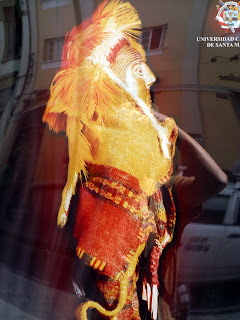 In fact, loads of sacrificed children have been found in the Andes, over 24 so far, including three boys in a pit and three girls in another on Misti, the volcano which looms outside our bedroom window. The Incas also picked on animals; 100 llamas were slaughtered at one sitting in Cusco. Llamas to the slaughter, just like the children.
The Incas' descendants today claim Juanita lives again through the museum in which they house her. If being gawked at every day by tourists peering in through her glass cage is life, I'm she'd rather be dead again.

(Unfortunately, none but the last photo above are mine. Cameras are not allowed at all in the Museo Santuary as they sell books with all the photos you'd otherwise take yourself.)
Labels: Arequipa Cañón del Colca Cusco Incas Perú sacrifice