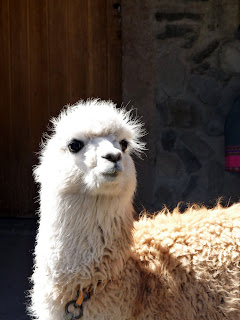 Alpacas have no problems with the cold, being covered in a thick coat of fur. One of them spat at me the morning after I had been freezing my ass off. I presumed he was tame enough as he was nibbling on tufts of grass in the yard of our hostel – wild alpacas don’t stay in hostels– so I asked Jenny to take a picture of me beside him. 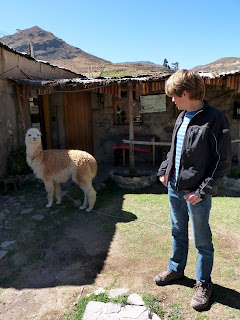 Rumi, for that was his name, evidently didn’t like having his photo taken and spat at me as I approached. The furry fucker. He continued to look put out, even as I refrained from approaching any closer. An indignant alpaca with a gobful of spit just waiting to project if I came any nearer.

Alpacas are a strange animal. Apart from Rumi, they generally have a perpetual look of surprise on their faces, as if they’d just found out they could be eaten.
Bistec de Alpaca is very popular here, and I was happy to order one the night before. Quite tasty I have to say; much better than I expected, and more than a match for beef. I shall certainly be eating it again.
Perhaps now we know the real reason for Rumi’s fury.
Labels: alpacas Cañón del Colca Perú