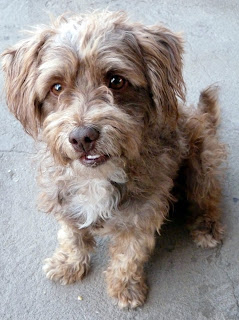 I like Nazca. The people seem friendlier here than in other Peruvian towns we've been. A polite nod, a friendly "Buenos días", a warm smile when you walk past.
Even the dogs here are very friendly. The hostel's little dog jumps up and down when he sees me, standing on his hind legs, walking backwards, threatening back flips. I'm sure if they could harness the energy from this perrito's ferocious tail wagging, they'd have enough electricity to power the whole town for a month. I know it's only because I give him food. Nevertheless, I promised to remain in touch, and shall be writing him postcards on my return to Berlín. He slept under the bed on our last night.

They're quite proud of their town, the self-proclaimed "Capital Astronómica del Mundo". A pity their welcome in English doesn't live up to their enthusiasm. "Welcome to Nasca, Patrimony Cultural of the Humanity For It's Atractives Toucists." 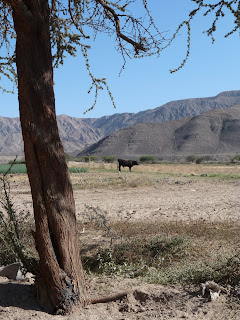 I know it's mean to laugh, but I couldn't help it. They aren't typos.

We accepted a kind offer of a lift from a woman who drove us halfway to where we wanted to go. It was actually nowhere near where we wanted to go. "Muchas gracias," I said as I made my way out of the car. She frowned disapprovingly. Jenny made frantic gestures before I realised the woman was looking for a tip. "Ah." I rummaged around for change and dug out a couple of soles. The woman inspected the coins as if I'd just handed her a turd. Frown ever deepening. Evidently not enough! Jaysus, you'd think if she was looking for money she'd actually bring us where we wanted to go, where she said she was going to go in the first place. 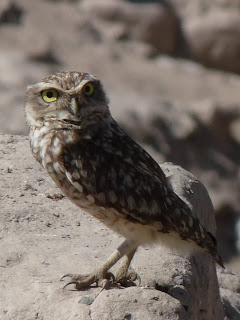 Anyway, we got out and found ourselves in front of the Pardeones ruins. An ancient Nazca settlement. Again, like all others I've been to, these ruins were ruined. They just don't know how to look after them at all. Broken walls, rubble everywhere. We climbed around and quickly got bored. Not another soul anywhere to be seen or heard. Then an owl provided some welcome distraction. An oul' owl, although to be honest I've no idea whether he was young or old. He spun his head around like a madman, and gazed at us with his deep yellow eyes.

We were captivated before he flew off and we again found ourselves in the middle of nowhere. We hailed a passing taxi and made it to the Cantayo Aqueducts. Spiralling stone walkways deep into the ground, some garnished with a pool of water at the bottom. 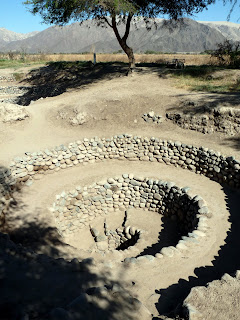 They're mad! Maybe 12 of them altogether. More than 1,000 years after they were built, they still irrigate the parched locality, bringing precious water from far away.

Again we were on our own, and the peace and quiet was sheer luxury. The odd gust of wind blowing clouds of dust into the air. 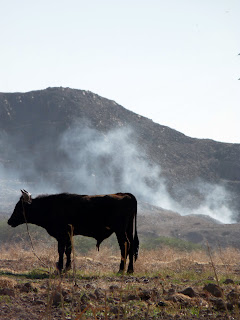 Nothing else to be heard but birds chirping in a neighbouring field of huge cacti, and the cries from about 200 goats in the other field next door. A couple of chilled-out cows completed a memorable vista with smoke rising and the mountains forming an impressive backdrop behind.

So far, my favourite place in Perú, despite all the cactus bristles. Running around the cactus field is optional and probably should be skipped if you truly want the five-star experience.

More pictures of Nazca and the "atractives toucists" of its environs, excluding the lines, can be found here: http://picasaweb.google.com/faheyc/Nazca#