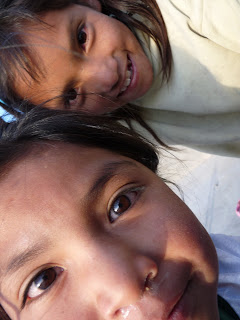 Another week almost over, and classes at Escuela Flora Tristán are progressing at an educational rate. Where learning is being done, it's very hard to measure progress at all, but things are progressing in any case, even it it's nothing more than the passing of time.

On Monday I had a class to teach on my own for the very first time. Armed with a whiteboard and marker, my task was to get the English language from my head into the students'. Preferably without it leaving my own of course, as that would prove quite inconvenient for my faltering journalistic aspirations.
After being asked the English for "arse" and "breasts" the week before, (very inquisitive these Peruvians), I decided to concentrate on parts of the body. Parts of the face too, not just the rude areas.
I drew a human face on the board, (presuming a human face to be more useful than, say, a dog's), and illustrated all the parts they might possibly need, from eyebrows, to dimples and freckles. 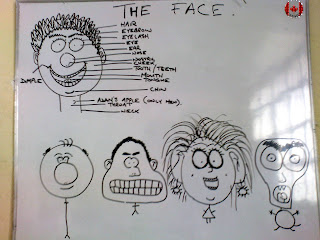 I also drew a serious of unfortunate-looking creatures with particularly small ears, or large noses, triangular mouths, a mopful of hair or none at all, before asking them to describe them for me.
They were captivated, particularly by the sight of a round fella with huge bulbous eyes, fangs, a monobrow and tail. Two of the girls, Luz and Alicia, even copied down the figures, complete with abnormal features and descriptions, with the latter showing them to her friends after the lesson. Monobrow and fangs are, of course, vitally important words when describing people, particularly here in Perú. 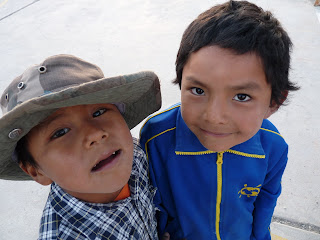 The rest of the week I spent bored shitless, while Cat, my English co-worker, brought the students through the delights of English grammar, particularly the past perfect and past simple, coupled with the object/subject influence on the presentation of questions. Jaysus! It's bad enough learning German and Spanish without having to learn English all over again too.

From Monday I'll have the class all to myself as Cat is finishing up today. I plan on avoiding English grammar altogether, and will instead concentrate on all they really need to know: Feck, Arse (which they know already), Drink and Girls. The rest is an ecumenical matter, and their willingness to learn "arse" this week fills me full of confidence ahead of the next.
Labels: Perú School volunteering work