Happy cacti dot the hills all the way to Chivay. All along the pampas from Arequipa, on the way to Colca Canyon, 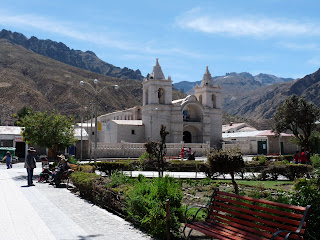 the prairie stretches as far as the hills and mountains will allow the eyes see. Vicuñas, alpacas and llamas graze the scarcely-surviving vegetation. Desert shrubs and hardy grass tufts.
As the bus bounces its way along the bumpy dusty road, the hills become bigger and more imposing. Volcanic rocks jut out from unlikely angles, jagged, sharp and unfriendly-looking. Only the cacti can make themselves at home here. 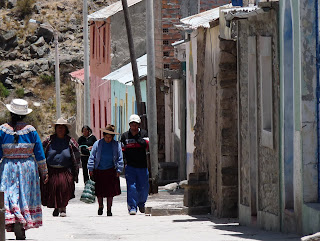 Jagged rocks hang threateningly overhead as the road snakes its way around the steep sides. Curve after curve after curve. No such thing as a straight road in Perú.
Suddenly, as we turn the squillionth turn, we can see a settlement far far below us. A deep gash in the plain can be seen stretching off beside it. It’s Colca Canyon! Three and a half hours after leaving Arequipa we’ve finally reached Chivay. Despite being 3,630 metres above sea level, we’re driving down from the mountains to meet it.

Chivay is a likeable place, and an ideal base from which to explore the canyon, either the largest or second largest in the world depending on who you believe. The locals, of course, will tell you Colca is the largest, but most neutrals will accept that this honour in fact belongs to Cañón del Cotahuasi, ten hours from Arequipa by bus, and 3,345 metres deep. Cañón del Colca is, after all, only 3,191 metres deep. Just don’t ever tell a Chivayan. Fiercely proud of their canyon they are. 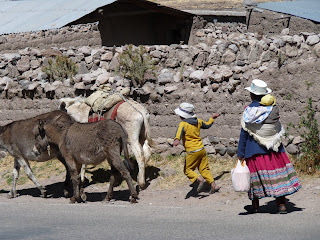 Canyon folk here wear were exquisitely-embroidered traditional dress. At least the women do. The men don’t bother, going around in dusty overalls and old football shirts. The women wear white hats embroidered with colourful designs, and fanciful garments painstakingly-decorated with delicate embroidery and designs which warrant closer attention. They often carry babies and/or goods for the market on their backs, wrapped up in blankets as fanciful as their dress.
With huge bundles wrapped up on their backs, they waddle along with their arms hanging limply by their sides. “They walk like penguins,” Jenny observed. Later she noted they all had particularly long noses as well. “Exactly like penguins,” I replied.

A more likely explanation for the rhinoceros features however, is the need for a counter-balance to the large loads the local women carry on their backs. If they didn’t have such long noses, they’d simply fall over every time they went to the market.
Labels: alpacas Arequipa Cañón del Colca Canyons penguins Perú