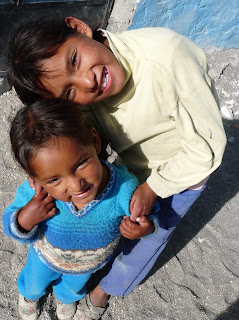 We've almost negotiated the first week of school and so far it's going to plan, or at least as much to plan as plans can go in Perú. Yesterday I worked with the 0 to 5-year-olds. Apparently they're an ideal age to learn another language, despite the fact some of them could barely speak their own.
I decided to teach them the colours, and set about preparing the class by writing them up on the board. A pity then, when I learned none of them could yet read. Never mind, I could call them out, tell them what the colours are.
In the end it turned into a colouring glass. For one little girl with snot all over her face, surely not much older than two, it turned into a how-to-hold-a-crayon-class. But somehow, despite the flying crayons, I think I managed to teach another little girl actually learned what "blue" is. Success!

"Yeah actually, I'd prefer to work with older ones," I told the coordinator today. No sooner said than done. The difference is unbelievable. Teenagers who can actually read and write, hold a crayon, and most importantly of all, wipe the snot off their own faces. Yes, we're making progress.
Labels: Perú School volunteering work