I've already explained the origins of Huancayo's city name. With this vital piece of information at hand, it is easier the understand the complexities of life in this mountain city of 323,024 people. 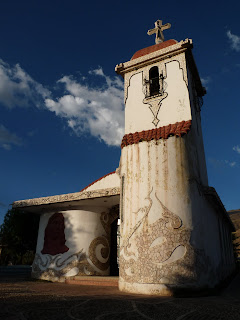 Locals are still proud to call themselves Wankas but perhaps none are more worthy of that name than the taxi drivers. Of course all taxi drivers are vermin, only slightly ahead of solicitors in the evolutionary food chain, but Huancayo's taxi drivers are truly the worst I've encountered.
They would sooner run over you than let you cross the road, beeping at you as you cross even if you're at a pedestrian crossing and they're driving through a red light. I do not exaggerate. We've had a couple of near misses. They also honk their horns incessantly (like real Wankas).
Even as I type, I can hear the fuckers beeping and honking outside as if their lives depend on it. They just never stop. Apparently, they beep at pedestrians to let them know they're free to take them to their destination. I'd sooner walk my legs to stumps than take a lift with one of those Wankas. Every third car here is either a taxi or a combi taxi so as you can imagine, the din is unnerving. 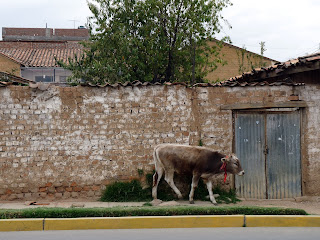 The locals have apparently never seen foreigners before either. Walking around is like being the centre piece of a freak show. All of them stare as if they've never seen such specimens before. Jenny's dreadlocks are a particular cause for wonder. (I don't know how many times she's been asked why her hair's the way it is and whether she can wash it). 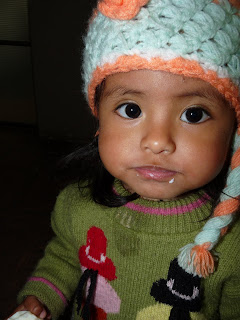 One day, we mistakenly paused for breath outside a shop. Suddenly a group of kids were around us asking us where we're from and whether Jenny washes her hair. As she fended off the questions, I tried counting how many kids were around us. It was impossible. They were multiplying! At least 35 formed a tight circle around us. Each new kid who joined asked the same questions again as they all stood gaping, wide-eyed in awe, amazed to see such strange creatures. Eventually we just had to push our way through the ever-increasing group to get past.
They followed us! A whole throng of the fuckers. We had to duck into a quiet side street to escape them.
(Other volunteers include Norma, a tall blonde German girl with legs up to her neck, and Zenab who's even taller, of Nigerian descent. You can imagine the looks they get.)

As if we're something to look at. You'd want to see the locals. Fashion is most definitely not their strong point. Brown woolly jumpers, black baggy tracksuit bottoms, black shoes and white socks without a hint of shame. The little old women, who are as wide as they're tall, wear about six woolly cardigans each, black skirts up to their necks, and big thick woolly socks up to their knees. Their arms hang out at their sides like penguins' as they waddle down the street. 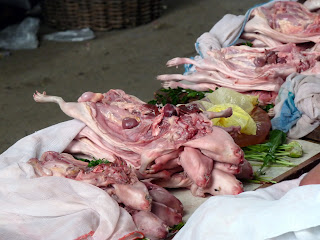 Mangy dogs are absolutely everywhere. Foraging in bins for food or sniffing the ground for morsels. Hundreds of them hang around the meat section of the market, roaming under counters drenched in the blood of chopped up cows and pigs (and guinea pigs), hopeful for a spare scrap to fall into their grateful jaws. (It wouldn't induce you to buy any meat. 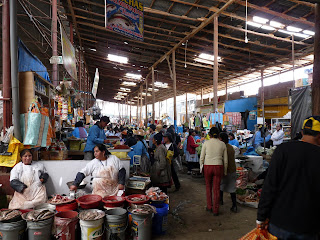 Flies land at will on the unprotected meat, while women half-heartedly attempt to wash and mop up the rivers of blood with pails of water.)
Even in the medical centre in nearby Chupaca, where we had to go to make sure we didn't have pig flu, there was a dog rummaging in the bin for food. Discarded body parts and amputated limbs I suppose. The medical centre was about as hygienic as the market. The toilets were an absolute disgrace apparently. I couldn't bring myself to look.
When not foraging or sniffing, the dogs just lie around bored. Thankful for the fleas for company.

Again, like Lima, the pollution in Huancayo is incredible. Noxious fumes, great black clouds belching from exhausts. Litter everywhere again, the river bank destroyed. Sheep and cattle roam the street-sides for scraps of grass, but how they find any at all under the refuse is beyond me. 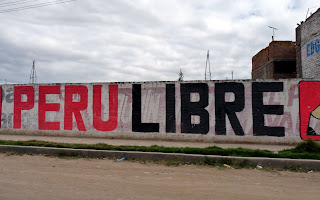 Tonight Huancayo celebrates however, as will the rest of Perú. Since attaining independence from Spain, this country has lost every war it has ever been involved in. That doesn't stop them celebrating. Tonight we'll be celebrating losing a vital battle in the war with Chile. Better to celebrate than mope about it I suppose, and I for one am happy to adhere to the custom.