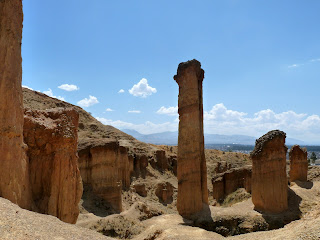 Torre Torre. So good they named it twice. Warped and wrinkled rock formations etched and chiseled into the side of a red mountain like nature got bored and wanted to try something crazy. Huge pillars of stone standing proudly for no particular reason, columns of aesthetic possibilities reaching mind-blowing vertigo-inducing heights. You wouldn't want to fall!
We wandered up there yesterday with Bobby, our hosts' scaredy-dog. Seriously, he ran away from a cat, a pail of water and the wind among other things. But we brought him along anyway. The sight of the perrito's little ears bobbing up and down as he ambled along more than making up for his lack of bravado.

We passed through shanty towns and dusty streets, the wind whistling à la spaghetti western, wizened gum-toothed locals wishing us "Buenas Tardes". Then abandoned shacks, and a lonely donkey eyeing the well-worn dusty trail. As if harbouring thoughts of freedom. A bird of prey circled high above us.
They warned us not to hang around Torre Torre after dark. "Muy peligroso." So we heeded their advice. 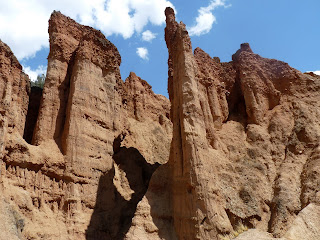 Like true gringos we left at midday, the sun beating down in all its intensity and not a scrap of shade to be found anywhere.
But it was worth it. Never mind the spectacle of the rocks, it was worth it just to get away from the incessant noise in Huancayo. Jesus, the relief! No beeping horns. No taxis trying to run you over. No godawful crap blaring from shot speakers. Just quiet. A quiet din from the city just to remind us it was still there, enough for us to revel in the contrast.
On the way back we saw a woman pulling a pig, apparently finding it difficult to coerce the animal to go where she wanted it to go. Her heels planted in the ground as she leaned back, pulling the rope taut as the pig leaned the other way. A particularly pig-headed pig. 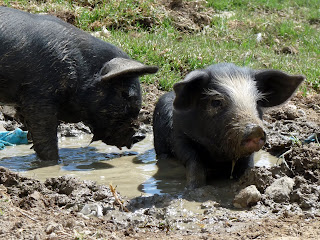 We also saw four piglets running and frolicking around in a pool of muck. Happy as pigs in shit, which is, of course, what they were. I was happy as a pig in shit just looking at them, taking about 400 photographs before the others called me on.

Tomorrow we'll be climbing the 5,557 metre mountain of Huaytapallana, a six hour trek which other trekkers have described as hell but worth it. Apparently you think you're going to die, but we'll find snow and ice, a glacier, some lakes and very little air. Every breath will be a fight to suck in scraps of oxygen. They'll be giving us coca leaves and chocolate to help us cope. As long as there are no beeping taxi drivers up there I don't care.