Riddle of the Sands (Nazca) 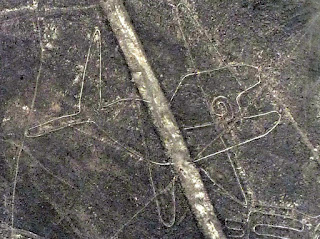 Sometimes to fully appreciate something you need to take a step back.
Sometimes even that's not enough. You have to really get back. Fly high above the Earth to marvel at what's below.

So yesterday we took a plane (being unable to fly ourselves) above the desert plains of Nazca to have a good gawk at one of the world's great mysteries. For these desert plains are anything but; they're home to the enigmatic and world famous Nazca Lines! (Just because you never heard of them doesn't mean they're not famous. Everybody else has.) 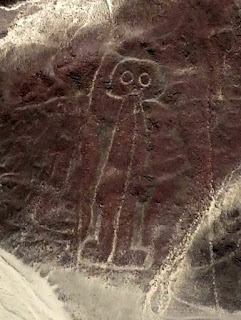 Crazy lines and mad angles, they include loads of various shapes, figures and creatures. (Geoglyphs if you're scientifically-minded.) From the ground these huge etchings are indistinguishable from the other lines, rocks and shit scattered about the desert but from the air one can clearly make out a dog, a pair of hands, a spider, a hummingbird, a stork with a wonky neck and a monkey with a ridiculously curly tail. Less clear is a tree, a parrot and a whale. (Surely the only whale to find himself in the desert).
Hundreds of others are scattered around this giant desert canvas. Meanwhile an "astronaut" scratches his head from an overlooking hillside at the madness of it all... 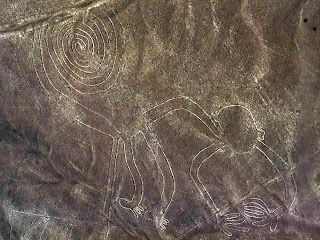 They're cool! Over 2,000 years after the Nazcans began decorating the desert (taking the darker sun-baked top to reveal lighter sand below and putting it to the side to make the lines), scientists and experts squabble over the reasons and point of it all. Sun worship? Messages for aliens? Some, if not just one, believe the Nazcans actually had hot air balloons and could fly above the desert to admire their handiwork.

After flying over the images myself, I've concluded they just did it for the laugh. Feck all else to do around here. There you go. Mystery solved, case closed. 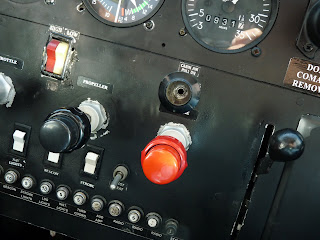 We flew above it in a tiny propeller plane, five of us including the pilot. I sat up beside him! I studied his every move and reckon I have it down. Just a matter of flickin' a few switches and pullin' a few levers. Easier than driving a car at any rate. No traffic lights or anything to crash into up there.

An inviting huge red button directly in front of me begged to be pressed, the temptation growing as the flight progressed. Thankfully the artworks below provided enough distraction for me to hold my will. I felt I passed a test.

Our pilot pulled off all manner of stunts to make sure we really saw the figures below. Jenny was so moved by what she saw, her stomach contents came out for a closer look too... 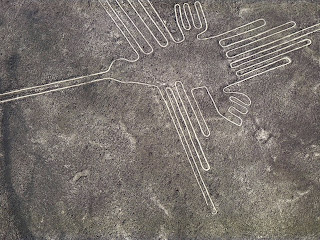 The German for desert is "Wuste" which I'm sure English-speakers can thank for the word "waste". Not taking any chances of confusion with an after-dinner sweet, these Germans.
Nazca is no Wuste though. Those iconic images show that sometimes desert can be sweet too.

More pictures from the plane above the plains which are anything buit plain can be marvelled at here: http://picasaweb.google.com/faheyc/NazcaLines#
Labels: art Lines in the sand Nazca Perú